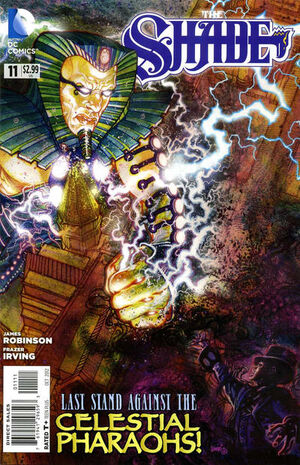 To live a life everlasting is to value those of a shorter span of years. I've come to see that, of late. But I sense not a jot of remorse for your actions in either of you. And by God, I want you gone from me.

Appearing in "The Bad Librarians"Edit

Synopsis for "The Bad Librarians"Edit

After he tricked his grandson Dudley Caldecott's Masonic cabal into returning the power of the Egyption gods it enslaved, Shade is stunned by the unintended consequence that those gods have begun laying waste to London, and are now embattled with the city's heroes. Those heroes have but one last hope in the form of Beaumont, whom the entities merely slap aside - leaving it up to Shade to save the day.

Having refined his powers over his travels since this adventure began, Shade recalls how the Inquisitor created a pentagram to enhance his power, and creates one of his own using the numerous places where he committed crimes in London. He had to re-anoint the points of that pentagram with the blood of criminals (of which the Scarlet Terror was one), and blessed the spell with the evocation of Scathach, a pagan god he learned of when he became the Shade. That evocation is to be carried out by Silverfin. Though he had hoped to be ready for anything through these preparations, Shade is bothered to have to actually use them against monolithic gods.

Using his shadows, Shade entraps the entities, and transports them away to the Dreaming - unfortunately, Shade himself is transported there too. Furthermore, this is not the Dreaming. The entities demand to know where they have been taken, and Shade angrily states that he is the one who should be asking questions, given that they just destroyed London.

They respond that they were sent from another place beyond time and space to chronicle and observe the Earth for the Hidden Library of the Crimson Corridor in the Sad House. This begs the question of why they decided to begin causing destruction. They respond that when they arrived, their portal home was broken, and they were trapped. This angered them, and the cruelty born from that anger led to revolt. They were trapped and then enslaved by Dudley's group. The carnage in London was merely their revenge.

Shade suggests that he may be able to send them home, but they warn that if they go home, their failure to carry out their mission will result in their deaths. This, they do not fear, choosing to die at home rather than live forever among humans. Eager to be rid of them, Shade concentrates, and sends them home.

After returning to London, Shade has one task left before returning to Opal City. Though he is sad to do it, he kills Dudley for his crimes.

Retrieved from "https://heykidscomics.fandom.com/wiki/Shade_Vol_2_11?oldid=1457427"
Community content is available under CC-BY-SA unless otherwise noted.