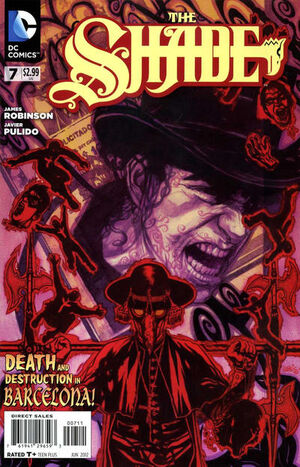 Don't worry, sir. For your audacious choices in suit linings alone, you deserve to live.

Though the battle between the Inquisitor's acolytes and the Shade and his companions lasts only short minutes, it seems to last much longer, and the stakes seem very high. The Basilica de la Sagrada Família is currently housing all of the hostages that the Inquisitor captured from Barcelona's Fashion Week, for reasons that the Shade arrived too late to hear.

Earlier, the Inquisitor had explained to La Sangre how he had died in 1944 from falling into a vat of molten steel. Unexpectedly, he had found himself in Hell, and consequently made a deal with Satan to first be allowed to possess his own acolytes, and later to return to his own body. In order to fulfil this deal he was required to offer souls to Satan. The massive device to which he strapped all of his hostages was a sort of "Soul Bomb" which, while powering its blast with the souls of those hostages would then consume the souls of the entire populous of Barcelona.

He revealed that he had five acolytes commit suicides at the sites of five of his previous crimes because those crimes had been committed in the name of God, and as such, he needed to consecrate them for Satan with the sin of suicide, creating a pentagram. Naturally, La Sangre vowed to stop his plan, just as Shade was entering the scene.

Though Shade had hoped to bring the fight to an end easily by detaching the Inquisitor's head from his body, he is stopped in his tracks buy the appearance of a demon - one whom he had met and beaten before in 1901. That demon claims to be the emissary of Hell, and that if Shade interferes, he will be defeated.

At that moment, Montpellier enters and urges Shade to attack the Demon, noting that the fact that one of the Inquisitor's crimes was committed in 1926 makes all the difference in weakening the evil magic. At this, Shade unleashes his shadows, and the demon is taken aback by his power. 1901 was before Shade's blood was replaced by darkness, so the demon could not expect the change in his power. Recalling that time, Shade remembers how his wife had been so old then, and he is filled with a sadness that leads him to envelope the entire Basilica in darkness.

Some time later, the trio of heroes cannot be sure that the Inquisitor was banished to the shadow realm, but it seems likely. Montpellier explains that the reason that he knew the Inquisitor's plan was vulnerable was because after 1926, the street on which the crime was committed was moved. So, when he had tried to reconsecrate the location with a suicide, it had been in the wrong place.

Sadly, La Sangre informs Shade that the sample of his blood that she had kept has spoiled, and will be of no use to him. This turns out not to be a problem, as his great-grandson Darnell Caldecott, for whom he had intended the sample, has died - though it is not good news. With that in mind, Shade decides to go to England to continue Darnell's work in finding out who in his family is trying to use the blood for evil purposes. Sadly, La Sangre bids him farewell, and tiring of letting people down, he offers her a kindness in admitting that he considers her a daughter.

In London, a Mr. Miles St. Aubrey warns his master that the Shade will soon be there.

Retrieved from "https://heykidscomics.fandom.com/wiki/Shade_Vol_2_7?oldid=1457423"
Community content is available under CC-BY-SA unless otherwise noted.