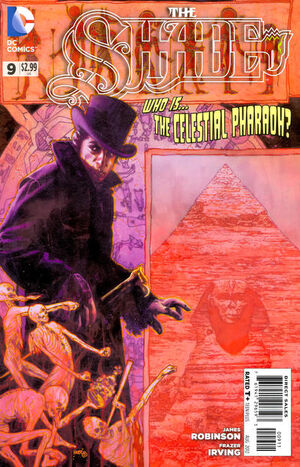 I'll refrain from the obvious lecture on how one should address one's elders and instead implore you to put an end to these theatrics. Armed, bespoke henchmen at your beck and call. Masonic cabals. I mean, it's hardly original... Like something out of a Bulldog Drummond adventure, or Rohmer.

Appearing in "Of London Now and Egypt Then"Edit

Synopsis for "Of London Now and Egypt Then"Edit

After leaving Barcelona, The Shade has come to London, the place where both Richard Swift and the Shade were born.

Somewhere in the city, Miles St. Aubrey and Dudley Caldecott are meeting after going their separate ways briefly to take care of matters in Nigeria and Afghanistan, respectively. Their dealings involve trafficking in weapons and the assassination of electoral candidates, and as they discuss this business, they begin to undress in preparation for a ritual of which they will both be part.

They and several other prominent men have gathered to make a human sacrifice, and with little thought, Dudley slices open the throat of their victim, keeping things quick, so as not to keep the Prime Minister waiting.

Shade, meanwhile, has cornered a bush league villain called Scarlet Terror in an alley with intent to kill him. Despite his recently heroic acts, Shade is no stranger to killing, and does not shy away from doing it again - besides, this time it's for a good cause. As such, a legitimate hero called Silverfin is eager to see the deed done.

The pair of them finish the man, and afterwards, Shade wonders whether the bag of favours that Silverfin has gathered will be up to the task he asked of him. The Irish-Romani assures him it will work, but requires a fair trade for his help - and he will come for his due eventually. In the meantime, he wonders if Shade is ready for what he faces, and Shade hopes that he is.

While Dudley Caldecott travels to a secret meeting place, Shade clandestinely follows him. After taking an elevator down to an abandoned London tube-tunnel, Dudley enteres a door engraved with Egyptian hieroglyphs. Through that door stand several men armed with automatic weapons. Not long after passing by them, Dudley is surprised to hear a great commotion, and he turns around to see that the Shade has taken them all down. Dudley recognizes him, and tries to run away - to no avail.

Though Shade offers him a chance to explain what's going on, and confirm that he is not involved in anything untoward, Dudley signals for help from more armed men, all of whom are decapitated by Shade's shadows. Though Dudley is too terrified to speak, Miles St. Aubrey will speak on his behalf. He introduces himself, revealing that the lair of their Egyptian-themed group is located beneath the British Museum.

Dudley is pleased to have taken a divergent path from that of his cousin Darnell, committing what Shade considers heinous acts in the name of their organization. The organization has apparently found the truth about the Egyptian gods: they are not dead, and rather than worship those gods, they control them.

Retrieved from "https://heykidscomics.fandom.com/wiki/Shade_Vol_2_9?oldid=1457425"
Community content is available under CC-BY-SA unless otherwise noted.