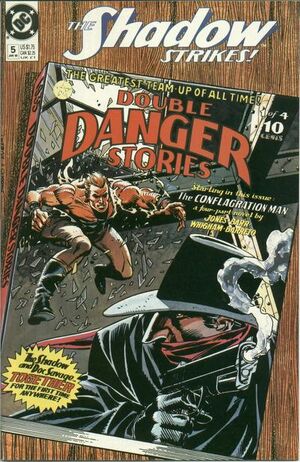 The cloak is damaged. The flesh damaged. Not the mind.

When a gangster kidnaps a scientist, who's invented a special detonator "ray" gun, the scientist's daughter enlists the help of Doc Savage and his crew. However, unknown to Doc, the Shadow is already on the case as a disguised gangster named "Al Ombra." When the two meet, Doc knocks out the disguised Shadow and takes him back to his Crime College to operate on the his brain. To be continued in Doc Savage Vol 2 #17.

Retrieved from "https://heykidscomics.fandom.com/wiki/Shadow_Strikes_Vol_1_5?oldid=1457442"
Community content is available under CC-BY-SA unless otherwise noted.