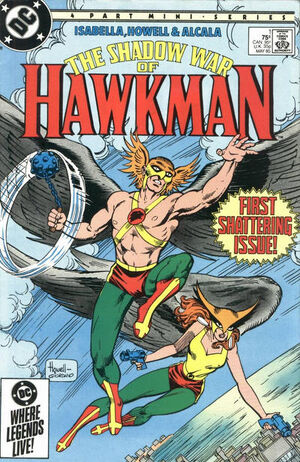 These frail Earthlings burn so brightly for so short a time. I find myself both awed by how far their tremendous spirit can take them -- and horrified by the evil they are likewise capable of.

Appearing in "The Shadow War of Hawkman"Edit

Synopsis for "The Shadow War of Hawkman"Edit

A group of Thanagarians has come to Midway City on Earth. They break into the home of cat burglar Mousy Mason and force him to undertake the task of stealing the anti-gravity belts that belong to Hawkman and Hawkwoman. Meanwhile, Hawkman and Hawkwoman use the Absorbascon to help aid them in the capture of a group of criminals. Police captain Stewart Frazier commends them on a job well done. Katar still feels uneasy over the moral question of using the Absorbascon to probe the thoughts of humans. They return to the Midway City Museum and resume their guises of Carter and Shiera Hall. But Carter finds himself swinging back into action as the intruder alarm inside the museum alerts him to a crisis at home. Leaving Shayera behind, he flies off towards their house. He finds Mousy Mason skulking about the place. Mousy is terrified and begs Hawkman to protect him from the strange shadow people. The black-clad Thanagarians appear from out of the shadows and attack them. Mousy is killed, but the Thanagarians are forced to retreat. Not having found the anti-gravity belts, they teleport to the museum. Hawkman frantically flies back towards the museum to warn Shayera. But when he arrives he finds cop cars outside and a scorching burn mark on the wall in the shape of Hawkwoman!

Retrieved from "https://heykidscomics.fandom.com/wiki/Shadow_War_of_Hawkman_Vol_1_1?oldid=1457480"
Community content is available under CC-BY-SA unless otherwise noted.