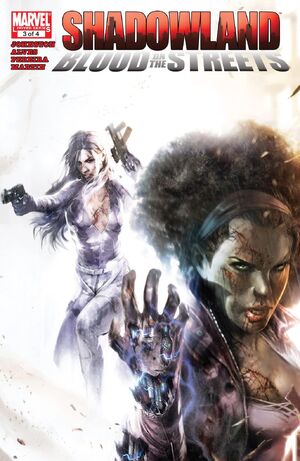 Misty Knight...The Shroud...Silver Sable...Paladin! As Shadowland continues to spread across New York City, the strange bedfellows finally come together—each struggling to solve the mystery of the Hand murders! The killing spree shows no sign of stopping, but the ninja’s latest victim is an unusual choice, and casts doubt among our heroes! Will their differences and mistrust keep them apart? Or can they work together to cut through the mystery before it’s too late...and before one of them becomes the next target?

Retrieved from "https://heykidscomics.fandom.com/wiki/Shadowland:_Blood_on_the_Streets_Vol_1_3?oldid=1452611"
Community content is available under CC-BY-SA unless otherwise noted.