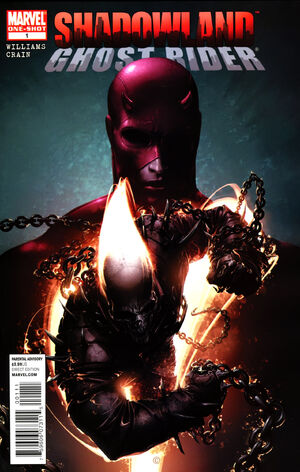 SHADOWLAND TIE-IN! When the Spirit Of Vengeance is summoned to the front lines of the battle for the soul of New York, Ghost Rider finds himself a pawn in a larger game, and if he wants his freedom back he's going have to head for Japan and take on the might of The Hand where its power is strongest - in its home base. But in the far east, he’ll find everyone's afraid of something... even the Ghost Rider.

Retrieved from "https://heykidscomics.fandom.com/wiki/Shadowland:_Ghost_Rider_Vol_1_1?oldid=1730285"
Community content is available under CC-BY-SA unless otherwise noted.