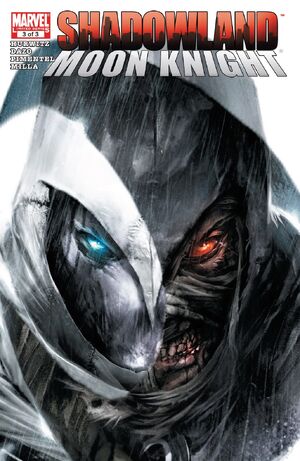 Appearing in "Brothers in Arms"Edit

As the gathered heroes continue their assault on Daredevil’s stronghold, Moon Knight is on a quest for the one artifact capable of defeating the Beast, the dark spirit currently controlling Daredevil. Standing in his way is the evil Shadow Knight, Khonshu’s new avatar and he’s determined to beat Moon Knight to the punch. But Moon Knight knows he cannot fail and he’s willing to do anything, even kill, to ensure Shadow Knight’s defeat. Don’t miss the thrilling conclusion to superstar writer GREGG HURWITZ’s modern noir masterpiece!

Retrieved from "https://heykidscomics.fandom.com/wiki/Shadowland:_Moon_Knight_Vol_1_3?oldid=1655302"
Community content is available under CC-BY-SA unless otherwise noted.