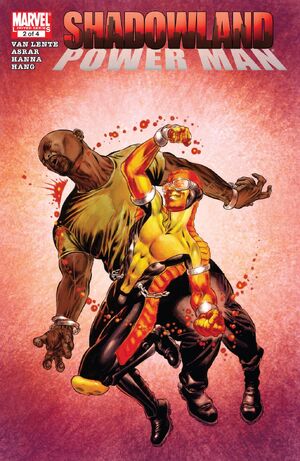 Appearing in "War In the Neighborhood"Edit

The war for New York's soul escalates big time when Luke Cage and Iron Fist take on the all-new, all-different Power Man! Who is the kid that can mop the floor with them both? And if that wasn't bad enough, the worst villains from Luke and Danny's past are crawling out of the woodwork en masse to take them on: Cockroach Hamilton! Comanche! Specs! Señor Muerte! Discus! Stiletto! Why has this flash mob of colorful criminality suddenly swarmed against our heroes -- and what role does it play in the long-term schemes of The Hand?

Retrieved from "https://heykidscomics.fandom.com/wiki/Shadowland:_Power_Man_Vol_1_2?oldid=1652683"
Community content is available under CC-BY-SA unless otherwise noted.