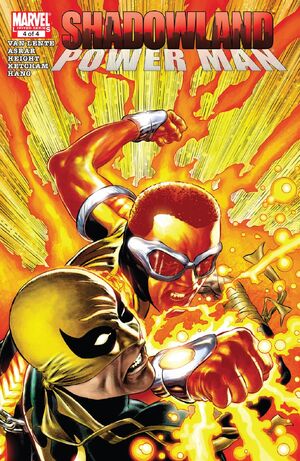 Appearing in "School of Thunder"Edit

The story concludes, leading to POWER MAN & IRON FIST in January! At last: Just in time for the final assault on Shadowland, the full truth behind the new Power Man's origin is fully revealed! What is his connection to Bullseye, the Hand, and Luke Cage himself? As Iron Fist and Power Man take on Daredevil, Marvel's latest sensation has a very personal reason for storming the ninja stronghold. But will the final revelation strengthen his newfound partnership with Danny Rand—or cause him to side with the forces of darkness?