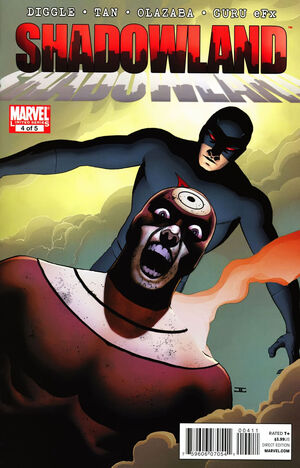 The final battle for the soul of New York erupts in Hell's Kitchen, and Daredevil is on the front lines...Hell, he IS the front line! Backed by the full power of the Hand, Daredevil is now more than a match for New York's strongest heroes. With a new right-hand man, Matt Murdock will finally show those who stand against him what it truly means to be a Man Without Fear!

Retrieved from "https://heykidscomics.fandom.com/wiki/Shadowland_Vol_1_4?oldid=1731024"
Community content is available under CC-BY-SA unless otherwise noted.