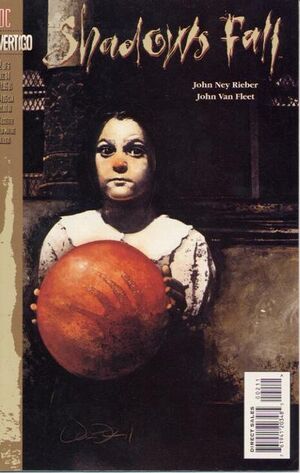 Appearing in "Toys for the Play of Ghosts"Edit

Synopsis for "Toys for the Play of Ghosts"Edit

Shen confronts Warren and we learn that the reason Warren's soul has separated from him was a decision he made when he was seventeen to hold up a liquor store. A cop pursued him, and a little girl was shot and killed by the bullets meant for Warren. Warren's soul detached itself and encouraged the police officer to shoot himself. Shen tells Warren that his soul has been responsible for many deaths and demands Warren help him put a stop to it.

Retrieved from "https://heykidscomics.fandom.com/wiki/Shadows_Fall_Vol_1_2?oldid=1473152"
Community content is available under CC-BY-SA unless otherwise noted.