Start a Wiki
Shaper of Worlds 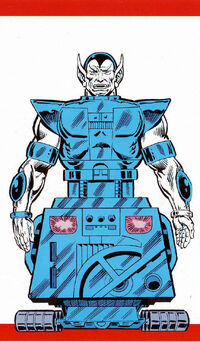 Thousands of years ago, the Skrulls developed an artifact to modify reality following the wishes of the user. It was the first Cosmic Cube, apparently created by forming a meta-singularity or gray hole, which was really an opening to a different universe. This universe was inhabited by mysterious beings called the Beyonders, who apparently wish to improve the development of sentient life. An X-Element from that universe crossed the grey hole and was trapped in a perfect force cube created by Skrull scientists. The Skrull emperor took the cube and declared himself a god. He reigned for many years but, unbeknownst to all, the Cube had potential to become a sentient being itself.[3]

Through the years of use, the emperor involuntarily imprinted some of his own traits upon the embryonic consciousness of the Cube, and thus the Cube began to develop his own personality. Since the Skrull emperor was a megalomaniac madman, the Cube mimicked that attribute. The Cube, acting on its own, transformed and destroyed several star systems in the Skrull's Andromeda Galaxy. Upon reaching emotional maturity, it had destroyed civilizations in two-thirds of the inhabited worlds in the galaxy, and as a result the Skrull Empire succumbed to barbarism, though the Skrulls would eventually reconstruct their empire centuries later.[4][5]

The Cube ultimately transcended the emperor's madness and developed its own masculine personality. It changed its body to look like a Skrull from the waist upwards. Motivated by its powers, he adopted the name of the Shaper of Worlds. Apparently due to a similar fault in the emperor, the Shaper had a very limited creative imagination, so he looked for intelligent beings whose imaginations would give him patterns to shape the worlds. The Shaper traveled through worlds giving substance to the imagination of "lesser beings". He traveled to Earth many times, attracted by the potential of the native humans.[6]

Creating in the Microverse

The Shaper created a replica of Earth in the Microverse. On this alternate Earth the Nazis had invaded the United States of America. The Hulk arrived on the world when he was shrinking through the Microverse. Battling the Nazis, the Hulk learned the truth about the Shaper. The Hulk confronted him and told him that he would deal with him once the fantasy was over. Hulk then teamed up with the alternate United States Army and turned the tides of the war. He found Dr. Otto Kronsteig, a former Nazi scientist who was banished to the Microverse by Doctor Doom, and was currently the subject whom the Shaper was shaping fantasies from. When Otto began to doubt the Shaper's promises, the Shaper appeared to him and reminded Otto that while he had the power to turn fantasy into reality, he was devoid of imagination, and as such sought out other beings to make their fantasies manifest, and that the only way the Hulk could win this battle was through Otto's doubting mind.

Otto then became Captain Axis, but the Hulk's power was too much, and he once again began to doubt himself. The Shaper came to the Hulk, furious at him for having ruined the illusion, and decided to manifest the Hulk's fantasies into reality instead; however, when the Shaper created illusions of his friends on Earth, as well as the late Jarella, the Hulk lashed out, knowing that they were not the real thing, and renouncing the gifts the Shaper had offered. Unable to appease the stubborn Hulk, the Shaper of Worlds sent him back on his way, resuming his reduction in size. Having become exhausted after this most recent bout, the Shaper decided to leave his microworld creation, and all its inhabitants behind, to reflect on everything that he has encountered.[7]

The Shaper next decided that he could not live forever and, understanding the latent psionic potential of Earthlings, took one of them as his apprentice: Thomas Gideon, now known as Glorian.[8]

The Shaper, having realized that he lacked imagination to create his own illusions, had decided to bring joy to others, and thus experience their wildest imaginations vicariously through them. He selected the Hulk as the first such person to receive his gift and sent Glorian, who thanked the Shaper for saving his life and giving him new purpose, to find him. The Hulk's wishes were granted, and he was reunited with old friends, but cracks soon began to appear, and the Hulk realized that this was all a lie once again; however, the Toad Men happened upon the Hulk's fantasy world, and wanting a world of their own, hoped to use the Shaper's powers to their own ends.[9]

The Hulk was forced by the Toad Men to find the Shaper and confront him, but the Shaper was insulted that the Hulk would turn away his gift and attempt to attack him. When the Shaper realized that the Hulk had a Nullatron Bomb strapped to his back, he reacted too late to stop it from detonating, and the blast knocked them both out. The Toad Men soon arrived on the planet to recover the unconscious Shaper. Eventually the Hulk and Glorian rescued the Shaper of Worlds and once freed he banished the Toad Men and returned the Hulk to Earth, annoyed that he would not accept his gift.[10]

Later Glorian was practicing his dreaming powers on a New Mexico town, making everyone think that they were someone else, someone better, but the Hulk was in the town and could see through the lie. He confronted Glorian, who turned the town's people into numerous villains including Bi-Beast, Rhino, Gargoyle, Abomination, Moonstone, and The Leader, as well as transformed Betty into the Harpy. Hulk defeated them all, before the Shaper of Worlds showed up. He returned everyone to normal, but left the Hulk in a town where every now hated him.[11]

When the Supreme Intelligence of the Kree discovered that a Cosmic Cube, which had been created on Earth and utilized by power-hungry psychos such as Red Skull and Thanos, had begun to show its own will and immature personality, it was considered a threat to the known universe.

The Supreme Intelligence contacted the Shaper, who went to Earth and calmed the Cube, taking from it any hate, paranoia, and hunger for power that it might have. Motivated by paternal feelings and a desire to penance for the devastation he had caused millenia before, the Shaper accepted the responsibility of supervising the development of this new Cube's consciousness. This Cube would become Kubik, the second apprentice of the Shaper of Worlds.[5]

The Shaper and Kubik later stopped Doctor Doom from stealing the power of the Beyonder, and helped the Beyonder and the Molecule Man to create another new Cosmic Cube.[12]

Sometime later, Glorian returned to Earth and tried to help the Hulk, but once more caused nothing but trouble.[13] Glorian almost lost his and the Hulk's souls to Cloot, but the Shaper of Worlds stepped in and forced the demon back. Before they both left for space once again, the Shaper told Glorian that he still had much to learn about his actions.[14]

The Shaper then formed the medieval world Eurth using the imagination of a child and the history of Avalon.[15]

Meanwhile, unknown to them all, Chancellor Kal'du had compiled files for Queen Veranke of almost every Skrull interaction with humanity including those of the Shaper of Worlds, in preparation for the Secret Invasion of Earth.[16]

At the behest of the Shaper of Worlds, Dawn and the Silver Surfer then began recreating the known universe, with Glorian and the Surfer focusing on the cosmic, while Dawn and Zee concentrated on Earth. But the pair soon began to alter things to their own desires. The Surfer resurrected then killed Galactus; meanwhile, Dawn quickly realized that her crafting was merely two-dimensional, so she created another Silver Surfer to help her, but all the changes upset the Shaper of Worlds.[18]

Once most of these anomalies were dealt with, only the duplicate Silver Surfer remained. The Shaper made Dawn choose between one of the Surfers, however, Glorian was impatient for the universe to be finished and killed the Shaper, whose power had been depleted during the creation of the universe. Glorian revealed that his ultimate goal was to break free from the Shaper's commands, for which he had waited until his master was weak enough to kill him.[19]

Soon after dying, the Shaper of Worlds learned the secret of the First Firmament, the very first iteration of all that is and the being responsible for putting the multiversal personification of Eternity in chains after his most recent death and rebirth. As a ghost, the Shaper of Worlds returned to his universe in order to warn Galactus (not the Devourer of Worlds anymore, but the Lifebringer) about what he had discovered, but ended up finding the Ultimates instead. In desperation, the Shaper's ghost attacked them, forcing them to restrain him.[20] He later joined the Eternity Watch to help Galactus save Eternity.[21]

Body Armor: The Shaper of Worlds is naturally protected against attacks, and can manipulate reality to be invulnerable.[22]

Reality Manipulation: The Shaper of Worlds generates illusions that typically cannot be distinguished from reality. Its initial reach is limited to a few meters, but increases when used. He can transform an entire planet in 21 hours. "Illusions" last for four years, unless the Shaper manipulates them again to be kept.[23]