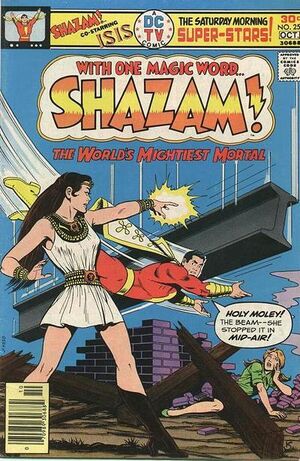 Zephyr winds that blow on high, lift me up so I can fly!

Appearing in "Isis... as in Crisis!"Edit

Synopsis for "Isis... as in Crisis!"Edit

Andrea Thomas and Rick Mason, teachers at the local high school, witness their old school building being demolished. Suddenly, Rick spots a student named Cindy Lee trapped by a fallen beam and a section of wall about to crush her. Andrea stands off to one side and says, "Mighty Isis!" A magical transformation occurs and Andrea becomes Isis, Goddess of Egypt. As she runs to the construction site she says, "Ground beneath us all, bury the tumbling wall". At her command, a mound of dirt surges upward, deflects the falling masonry, and saves Cindy. Captain Marvel arrives as Cindy explains to Isis that she saw two suspicious looking men running through the site. Captain Marvel asks Isis how she acquired her powers. Isis does not reply and begins to daydream about the time when Andrea Thomas, in Egypt on a scientific expedition, found the amulet that enabled her to become The Mighty Isis. She is broken out of her daydream by Captain Marvel. As he leaves, Isis runs around a corner and disappears.

Cindy asks Rick if they could see a movie together. He turns her down but he lends her his car so she can go. As Cindy frets about being treated like a child, the two men, who robbed the local museum, return to the site and start to dig for their stolen gold coin collection. As they make their getaway, Cindy recognizes them and follows behind in Rick's car. The robbers capture Cindy, tie her to the car seat, and release the hand-brake so the car can go off a cliff.

Back at the construction site, Andrea asks the foreman about the two men. When he tells her that he saw Cindy going after the robbers, Andrea runs behind a trailer and changes into Isis. She says, "Zephyr winds that blow on high, lift me up so I can

fly!" She soars as the falcon soars, rescues Cindy and captures the fleeing gold robbers.

Appearing in "The Bicentennial Villain"Edit

Synopsis for "The Bicentennial Villain"Edit

Retrieved from "https://heykidscomics.fandom.com/wiki/Shazam_Vol_1_25?oldid=1564276"
Community content is available under CC-BY-SA unless otherwise noted.