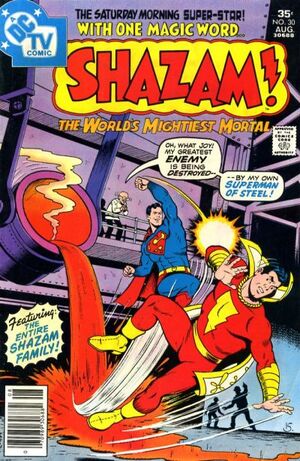 Curses! It's the Big Red Cheese!

Appearing in "Captain Marvel Fights the Man of Steel"Edit

Synopsis for "Captain Marvel Fights the Man of Steel"Edit

Billy Batson and Uncle Dudley travel to Ft. Pitt in Pittsburgh, where they discover that Doctor Sivana broke into the facility and stole a copy of a DC Comics comic book. In his hidden lair, Sivana reads about the adventures of Superman and decides to create his own Man of Steel. He produces a robotic brain and then dumps it into a smelting vat at a local steel factory. The molten metal forms around the robotic brain, taking the form of an old folk hero, Joe Magarac.

As Joe Magarac begins sabotaging the steelworks, Billy Batson changes into a Captain Marvel and confronts him. He punches him through the ceiling, but Magarac comes back and later captures the hero while he is in his human guise of Billy Batson. Sivana has Magarac place a metal gag across Billy's mouth, but Billy manages to trick Joe Magarac into removing it, thereby allowing him to transform back into Captain Marvel.

Captain Marvel uses the eterni-phone to consult with the elders. The spirit of Atlas informs Marvel that he will need the aid of the entire Marvel Family to stop Sivana's scheme. Captain Marvel flies across the country and rounds up Captain Marvel, Jr., Mary Marvel and the Lieutenant Marvels. They all return to Pittsburgh, and Captain Marvel has one final showdown with Joe Magarac. He succeeds in defeating him, and apprehends Sivana.

Retrieved from "https://heykidscomics.fandom.com/wiki/Shazam_Vol_1_30?oldid=1457548"
Community content is available under CC-BY-SA unless otherwise noted.