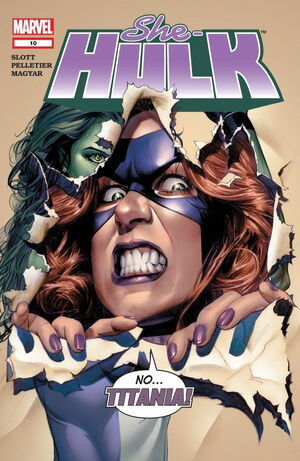 The Story starts in space with Zoma the Watcher watching a "being feared throughout the galaxy" acquiring a omega class warp suit. Suddenly the being arrives in front of the watcher. He tells him he needs information regarding She-Hulk. Zoma agrees due to the incident with Qyre the Watcher being made mute. The stranger wants to know who hates She-Hulk the most. Zoma tells him the story of Titania:
He starts with the most recent events of the single punch defeat in She-Hulk #9, then explains her origins.
Mary was born prematurely and was one of several children and she never physically developed much. In school she was teased and given the nickname Skeeter. She met her only friend the same day, Marsha. She had a bad life eventually becoming angry at the world and wishing to be a super hero. One day she witnessed a fight between Spider-Woman and Man-Bull and then jokingly told everyone she was Spider-Woman. Weeks later Denver (where she lived) was made into a part of Battleworld. When they arrived, Mary was seen in public at the same time as Spider-Woman and dubbed a liar and outcast, but she and her friend were transformed by Doctor Doom into super people. Her first failure was against She-Hulk and she never forgot it. She hated her so much that it overwhelms everything else.
The stranger says she is perfect and travels to Earth and finds her just after she has landed from the punch, he reveals himself as the Champion and offers Titania the Infinity Gem of Power.

Retrieved from "https://heykidscomics.fandom.com/wiki/She-Hulk_Vol_1_10?oldid=1452673"
Community content is available under CC-BY-SA unless otherwise noted.