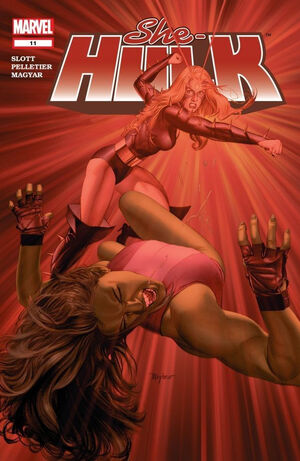 Face it, Greenie. There's only room for one strongest woman...and it ain't you!

Appearing in "Imbalance of Power"Edit

Synopsis for "Imbalance of Power"Edit

Champion is teaching Titania how to use the infinity gem of power, he reveals that he could always summon it back and she crushes him with an immense amount of rock. Meanwhile She-Hulk wakes up as Jen Walters and lets Southpaw out of her room, before she can turn to She-Hulk Southpaw attcks her. Southpaw runs to the door but Doc Samson is there. At Awesome Andy's room, Andy is awakened by a knock at the door, he leaves behind the robotic head of the android Mad Thinker to answer it and babysits Southpaw. She-Hulk reflects on her life to Samson, including losing control of herself and killing the Vision. Back at the Excelsior Apartment, the building is destroyed by Titania looking for She-Hulk, Ditto gives her the information she needs out of fear. A Bit later, at the office Mallory Book is called to the head of staff after her lack of court victories which she blames on She-Hulk. Titania attacks the building, shattering the imnpenetrable force field. The mail delivering Speedsters get everyone out but Mallory is critically injured. Doc Samson and She-Hulk rush to the scene. Where Titania hits DOc Samson head on with a chimney and swiftly defeats She-Hulk knocking her into the sbway, She-Hulk reverts back to Jen Walters and Titania prepares to crush her.

Retrieved from "https://heykidscomics.fandom.com/wiki/She-Hulk_Vol_1_11?oldid=1452674"
Community content is available under CC-BY-SA unless otherwise noted.