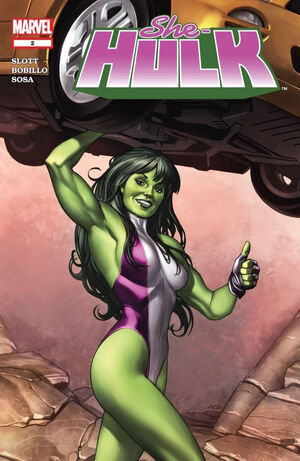 Eight Days from now, he'll be gunned down whilst driving a getaway car.

-- Doctor Strange to Mallory Book regarding a client.

The Story starts with She-Hulk leaving for her first day of work, getting ready whilst talking to Scarlet Witch and Wasp. She is fearing going out into public as regular Jen Walters. The Scarlet Witch puts a cloaking spell on her which means anyone who wishes her harm in the form of Jennifer Walters will not be able to see her. When she arrives at JLK&H, she is given a tour by Ditto in the form of Holden Holliway. During her tour she discovers an Atlantean, Moloids and even Bird-People. She also see's Doctor Strange talking to Mallory Book about a client, she then walks into the recently reformed Awesome Andy. She then recives Danger Man as her first client, in the end when all hope seems lost, he trys to have a meltdown so his family will have money, She-Hulk as regular Jen Walters manages to calm him down and win the case.

Retrieved from "https://heykidscomics.fandom.com/wiki/She-Hulk_Vol_1_2?oldid=1452663"
Community content is available under CC-BY-SA unless otherwise noted.