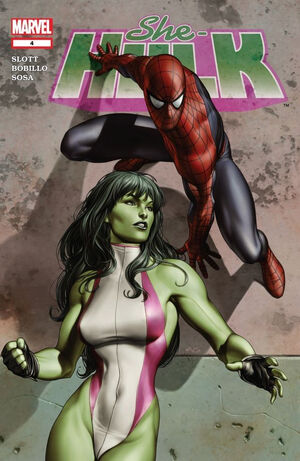 Appearing in "Web of Lies"Edit

Synopsis for "Web of Lies"Edit

The story starts with She-Hulk and Pug attracting Spider-Man's attention and then telling him they can offer him a way to get back at the Daily Bugle. We then see ditto in the form of a celebrity telling J. Jonah Jameson that he is being sued for libel. The next day Spider-Man brags to his wife his plans for the money, whilst at JLK&H, She-Hulk, Pug and Awesome Andy discuss the plan and Pug also mentions that She-Hulk would profit more if she worked out as Jen Walters. Meanwhile Scorpion decides to attack the courthouse on the day of the trial and convinces Alistair Smythe to give him his Spider-Slayers. During the court, Pug has to take She-Hulk's place when she makes a date with a witness, John Jameson. After a promising start with many of Jameson's employees as witnesses, Spider-Man and She-Hulk leave to battle the Scorpion and they succeed, however Pug makes the mistake of involving Peter Parker in the affair causing Spider-Man to settle for J. Jonah Jameson and Peter Parker handing out public apologies whilst in chicken suits.

Retrieved from "https://heykidscomics.fandom.com/wiki/She-Hulk_Vol_1_4?oldid=1452666"
Community content is available under CC-BY-SA unless otherwise noted.