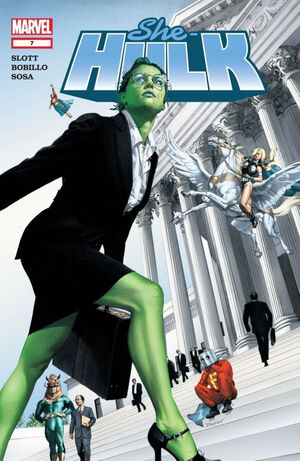 The Story starts on the planet Skardon with Beta Ray Bill and Champion preparing for a boxing match. Bill cannot bring Stormbreaker into the ring as weapons are banned. The fight is viewed by the Magistrati who know Bill will not win. On Earth, She-Hulk and Southpaw are arguing when the Magestrati arrive and offer She-Hulk a place in their society as a lawyer. She-Hulk goes and takes Southpaw with her. Back on Skardon Bill has been defeated and Adam Warlock, Gamora and Pip the Troll send in Kallark, Gladiator. The Magestrati once again admits that he cannot win against Champion but says he must withhold outloud judgment. Meanwhile She-Hulk is told about Universal law by the Living Tribunal. On Skardon Gladiator is defeated and Adam Warlock takes into the ring. Meanwhile She-Hulk meets her recorder, Zeta 9. She is given her first three cases:

2 Alien Parents want their child to be part of 2 different religions, She-Hulk quotes the bible story of cutting the child in half and seeing who cares more. But before she can finish they cut the child in half only for it to respawn sot he parents have a child each.

A sloth-like race and an extremely fast thinking burd-like race are arguing over a crashed ship. Whilst the Sloth-people spend the whole time greeting She-Hulk the bird race make their case, go to war, end the war and leave the planet.

3 Watchers, Uatu Zoma and Qyre, come to argue that Qyre should be able to watch over a planet he has just discovered but the people will not allow it. In the end She-Hulk rules that if Qyre is forbidden from going to the watcher meets he is allowed to watch the new planet.

Meanwhile on Skardon Adam Warlock is severely beaten and Gamora forfeits the match on his behalf, The Magistrati offer to send a court appointed boxer, this although she doesn't know it is She-Hulk.

Retrieved from "https://heykidscomics.fandom.com/wiki/She-Hulk_Vol_1_7?oldid=1452669"
Community content is available under CC-BY-SA unless otherwise noted.