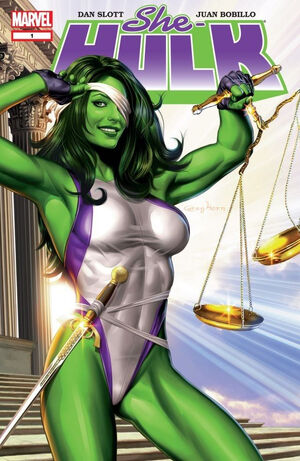 Appearing in "Many Happy Returns"Edit

“CAPTIVE AUDIENCE” The surprise hit from last year is BACK in a new ONGOING series! Join She-Hulk as she deals with the bizarre legal problems of the Marvel U.!

Strange twists, exciting adventures, and lots of one, two, and three-part stories guest-starring all of your favorite Marvel Characters! See why ain't it Cool News says, “SHE-HULK is the best comic Marvel publishes today.”

And in this first issue, She-Hulk isn’t the only one returning. Get ready, True Believer! Because it’s NOT a dream, NOT a hoax, and NOT HOUSE OF M… HAWKEYE’S BACK!

We kid you not! So why is Clint Barton giving Jen Walters such a hard time? And how is his fate tied in to She-Hulk's latest case?

Well…you’re just going to have to check out SHE-HULK #1 to find out!

SPECIAL HOUSE OF M AFTERMATH-- With guest appearances by THE NEW AVENGERS and CASSIE LANG (TITAN, from YOUNG AVENGERS)

Retrieved from "https://heykidscomics.fandom.com/wiki/She-Hulk_Vol_2_1?oldid=1753778"
Community content is available under CC-BY-SA unless otherwise noted.