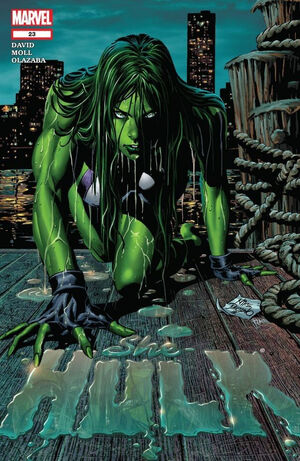 Like a paper towel...and water... ...so much water that he can't ignore it...it's in him, through him... maybe "Absorbing Man" really was the more appropriate name for him after all.

A nice, simple mission for She-Hulk has gone horribly wrong as, deafened and reeling, she finds herself facing the combined might of the Absorbing Man and Titania.

Including previews of Captain Marvel Vol 6 1.

Retrieved from "https://heykidscomics.fandom.com/wiki/She-Hulk_Vol_2_23?oldid=1452700"
Community content is available under CC-BY-SA unless otherwise noted.