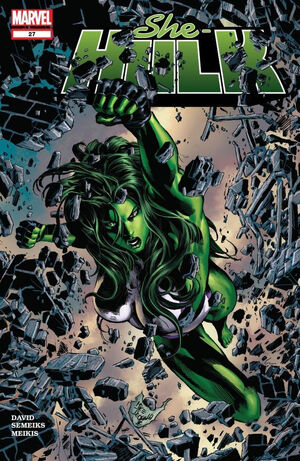 The first reporter who talks to me dies in Al-len-town.

Appearing in "Friends in Need"Edit

Synopsis for "Friends in Need"Edit

Jazinda and She-Hulk are driving through Ohio and having an argument about Jazinda's healing factor which appeared to Jennifer to heal her even from death. They stop at a 24-hour gas station to get gas and on TV they see that Laurence (Larry) Ryan has been arrested for the murder of his wife, Tanya. Jennifer immediately realizes she has to go back and she was negligent in simply letting Larry be on his own after the battle with Kodor. Suddenly, two would-be robbers burst through the door and, waving handguns, are about to demand the store's cash, until they see She-Hulk looming over them.

Once in Allentown, She-Hulk gets into an argument with Larry through his cell door. Larry blames her for not saving his wife and says that "death and destruction" seem to follow superheroes and says they destroy as many lives as they seem to save. In her zeal to argue with Larry, She-Hulk rips the door from the cage and the police troop in aiming at her for attempting to break Larry out. Jennifer uses Jazinda's cell phone to tell Mallory Book the situation and ask for help.

The next morning in court, Jennifer tells the judge that she is willing to make restitution for the jail cell. The judge accepts this and decides he would rather have her out of Allentown rather than force her to spend thirty days in jail for willful destruction of city property. Jennifer requests to stay for the arraignment of Larry Ryan. The prosecuting attorney recommends no bail option even though Larry has a clean criminal record. Suddenly, Mallory Book enters the courtroom and says she is there to represent Mr. Ryan. Book recommends Larry be set free because he witnessed a possible precursor to an alien terrorist attack. The judge is reticent to grant this, until Iron Man enters the court room and vouches for the defense. On his way out of the courtroom, Iron Man slips Jennifer a note that says "I'm Sorry".

Driving out of town, Jennifer recounts the number of times friends have betrayed her and in a show of trust, Jazinda tells her that she has stolen an ability to prevent her from ever dying and that now the entire Skrull race is after her to regain this power and kill her for good.

Both She-Hulk and Mallory Book make reference to the derisive description of Allentown from the Broadway musical, 42nd Street.

Retrieved from "https://heykidscomics.fandom.com/wiki/She-Hulk_Vol_2_27?oldid=1452705"
Community content is available under CC-BY-SA unless otherwise noted.