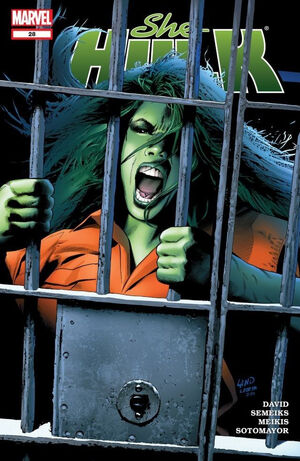 Pretending to be human is amusing. Especially when I do it so much better than you.

In Cleveland, Jazinda and Jennifer head for 271 Carey Street to speak with Bran Murphy. His daughter says that he is at work and Mrs. Murphy slams the front door of the house shut in their faces. Jazinda and Jennifer drive to Cleveland Browns Stadium to look for Bran. Posing as vendors, they scout the stands for Bran and locate him in the third row. Murphy is sitting with Arthur Moore. She-Hulk attacks Murphy and Moore, but Murphy is able to throw She-Hulk onto the football field. This surprises She-Hulk because he is showing enhanced strength. Jazinda gets shot and the men run while the women give chase. Outside of the stadium, they clash again and Bran insists he did not cause a building in Manhattan to explode. The police arrive and Moore tells them that She-Hulk is violating the restraining order that Moore has against her.

For the second time in 24-hours, She-Hulk finds herself in jail. Her cellmate tells her a brief glimpse at her life, which involves having been raped and having hospitalized the man who was trying to sell her daughter drugs. The discussion revolves somewhat around whether or not Jennifer has slept with Juggernaut; Jennifer tells the woman that Juggernaut is gay.

She-Hulk is booked in the Cleveland Police Department with #2024561414. This number has been associated, by some sources, with the White House.

The Cleveland Browns are playing host to the San Diego Chargers.

Retrieved from "https://heykidscomics.fandom.com/wiki/She-Hulk_Vol_2_28?oldid=1503801"
Community content is available under CC-BY-SA unless otherwise noted.