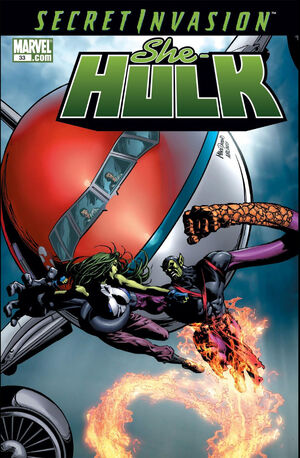 She survived! That's her real crime, isn't it? Your son, your pride and joy, died, and Jazinda lived, and that's what you can't forgive her for! Every time you look at her, you see the son you lost! Don't pretend this is about her! It's about you! You're too gutless to live with the daughter who was resourceful enough to survive! Because you keep thinking that maybe if you'd trained your son better, he'd still be alive! You see your own failure in her!

Appearing in "Fathers and Daughters"Edit

Retrieved from "https://heykidscomics.fandom.com/wiki/She-Hulk_Vol_2_33?oldid=1521241"
Community content is available under CC-BY-SA unless otherwise noted.