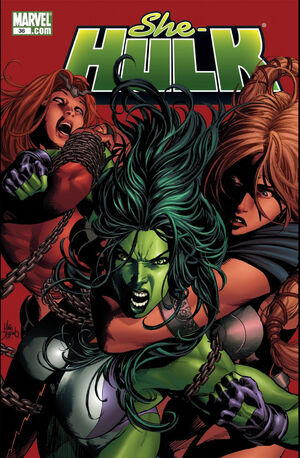 You're getting a second chance at life, Mr. President. Use it wisely, because I swear to God, you won't get a third. Now run. RUN!!!

Jen talks with Darqon Par at his request, and is captured by him alongside Sue Storm. Jazinda rescues them, but Jen has to stop her from killing Par, then almost accidentally killing him herself while Sue saved him. The girls stage his death and drop him in the Australian outback.

Retrieved from "https://heykidscomics.fandom.com/wiki/She-Hulk_Vol_2_36?oldid=1452713"
Community content is available under CC-BY-SA unless otherwise noted.