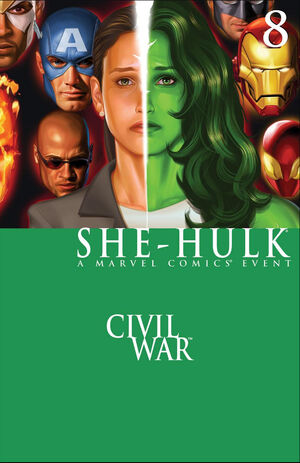 As John Jameson and Jennifer discuss the current backlash against super-humans as a result of the Stamford incident and how that will effect her dual identities as both Jennifer Walters and She-Hulk, Jen tells John that until her Gamma activator is repaired she's stuck as Jen. However, later Doc Samson takes Jennifer to visit Dr. Strange, who finds the source of her of the problems with her ability to transform back and forth between Jen and She-Hulk: An old hex placed on her by the Scarlet Witch which made people unaware that Jennifer Walters and She-Hulk were one and the same. In order to restore the control of her powers, Strange had to remove this Hex.

This plays against her, as she takes on representation for Justice and Rage, two surviving New Warriors who are seeking to have the website "Destroy All Warriors" that has been outting the secret identities of surviving members of the New Warriors, past and present, in the hopes of the reaction leading to their deaths. Before taking the trial to court, the same website outs Jennifer as the She-Hulk, forcing Jen to become her alter ego and represent Justice and Rage in court as She-Hulk.

As the trial goes from the taking down of the site to a forum for victims of the Stamford incident (putting Rage into a fit of anger that nobody recognizes that his fellow Warriors had died as well.) John Jameson is confronted by his superiors who tell him to make a choice about his relationship with She-Hulk because it effects the image of the military. John secretly meets with Captain America, who tells John to follow his feelings.

Meanwhile, back in court, Iron Man is put on the stand and questioned about the vailidity of the SHRA, which She-Hulk questions the point of Stark revealing his identity as he has shown the capability to erase peoples memories of his true identity in the past. After the the trial, Stark gives She-Hulk a memory card with information on the owner and operator of the Destroy All Warriors website.

Jen and a number of other former members of the New Warriors, crash on the owner who turns out to be the former New Warrior known as Heindsight. When asking him why he created the website, Heindsight tells them that after the Stanford incident, he lost all faith in the Warriors and wanted nothing to do with their legacy and opened the website to destroy them. Just before an angry mob forming can attack all assembled, they mob is disbursed when John Jameson arrives in a ship. Upon arriving, John reveals that he has come not only to get Jennifer out of a pickle, but also to propose to her.

Retrieved from "https://heykidscomics.fandom.com/wiki/She-Hulk_Vol_2_8?oldid=1561781"
Community content is available under CC-BY-SA unless otherwise noted.