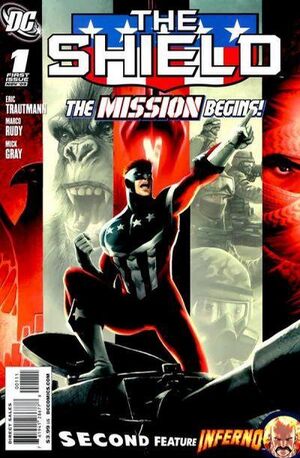 Our culture is in ruins... ...But at least the Americans have brought us comic books.

Appearing in "Kicking Down the Door, Part 1"Edit

Synopsis for "Kicking Down the Door, Part 1"Edit

Synopsis for "Burning Inside, Part 1 of 4"Edit

DC Solicitation:
Spinning out of August's "Red Circle" event from superstar writer J. Michael Straczynski comes the new ongoing adventures of the patriotic Shield and the mysterious man on the run, Inferno! Eric Trautmann (CHECKMATE) and Marco Rudy (FINAL CRISIS) take Lt. Joe Higgins, a.k.a. The Shield, into the hotspots civilians dare not go. His first mission takes The Shield to the razed country of Bialya, destroyed by the rage of Black Adam in 52. Something lurks in the mountains beyond militia activity, and The Shield must investigate!

Retrieved from "https://heykidscomics.fandom.com/wiki/Shield_Vol_1_1?oldid=1475273"
Community content is available under CC-BY-SA unless otherwise noted.