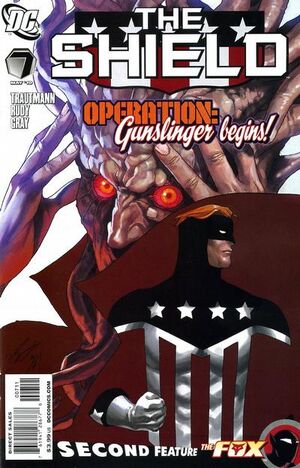 At an abandoned HIVE complex in northern India, the Shield and a crack team of special forces soldiers have been sent in after reports of activity. The unit finds troops on site, but the Shield is more concerned about the "walker" that one of the opposition is piloting. Taking him down, they move on. Further into the complex, the Shield finds a self-destruct sequence, which he deactivates with less than a second to go. As he shrugs it off, he thinks about the last time he came so close to death.

Eight months ago, he was hit by a Afghan RPG and thought he would never wake up again... only to come to in the course of a heavy-duty operation to reinforce his system with nanotech. Two months later, he was getting combat training from Staff Sergeant Cullen, one of the best trainers in the American military. Cullen gives him hell, but when the Shields's super-sensors are activated later, he hears Cullen talking to another officer. Cullen sys he may turn out OK, but he Cullen wanted to know why they didn't have a Special Forces man in the suit to begin with... and where they got the suit from in the first place. Both answers are classfied.

In the present day, the Shield and Sergeant Cayce go to a briefing. Their last few missions have been part of their search for extreme WMDs, and both have led them to HIVE bases. However, HIVE was no longer running these bases - records indicate that a new player, codename "Black Seven", is responsible. Black Seven is selling extreme WMDs to the highest bidder, and that makes them the Shield's next target. Their next operation will be to track down all the Black Seven bases they found in the databases of the sites they have hit, and tear it all down.

To aid them, they will be getting help from a former enemy: Malik Al-Thaka aka the Brain Emperor!

In Tokyo, a masked martial artist takes down a squad of six gunmen. He utters only one word: "Revenge".

Five years earlier, a documentary maker named Paul is looking at some footage taken by his missing father, a CIA operative who was sent to Japan. He recieves a phone call from a woman named Delilah Monaco, who says she has information about his father disappearance. When he comes to Tokyo, she tells him that last week, a group of tough guys were in her bar, and one of them showed off a cheap ring he'd taken from a man years earlier. She recognised it as belonging to Paul's father.

To aid Paul, she decides to take him to see the "Heikou Harakara", an order of ninjas who act as the balance keepers of the Japanese underworld. They go to ask them to kill the man who killed Paul's father, but a fox jumps up on the table in the middle of the meeting at stares at Paul. The ninjas respond by drawing swords and asking Paul for the real reason he came to them.

Back in the present, the masked martial artist draws a sword on the last member of the gunmen and tells him to tell his master: the Fox is coming...

Retrieved from "https://heykidscomics.fandom.com/wiki/Shield_Vol_1_7?oldid=1475279"
Community content is available under CC-BY-SA unless otherwise noted.