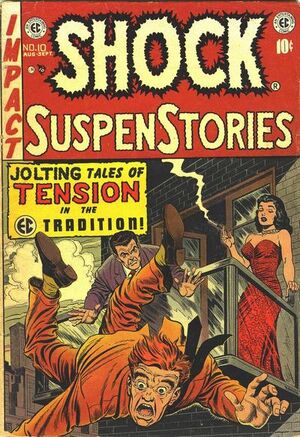 1 of 4
Add photo
A woman manipulates a man into killing her husband by pretending to be in love with him. She and her lover work out a scheme whereby he claims to be a witness to the killing and blackmails the two of them into letting him sleep with the woman. She pretends to be disgusted by the indecent proposal but tells her dupe that it's the only way to avoid the electric chair and that when the man has slaked his lust, she'll be all his. She carries on this act, pretending to be progressively degraded and begging for salvation, until the dupe finally writes out a confession implicating only himself in the murder and swallows a bottle of poison. She then gleefully regales the dying man the details of the con.

Appearing in "So Shall ye Reap!"Edit

Synopsis for "So Shall ye Reap!"Edit

A young man sitting in the electric chair reflects on the events of his youth while his parents sitting at home do the same. The parents see their past actions in a positive light but their son sees things from a different perspective.

Astronauts are approaching Mars when one of their number admits to them that he is really a Martian who designed the rocket in order to return home after his crashed. The other astronauts think he has lost his mind and attempt to seize his gun which discharges, killing him. They land on Mars and notice that the body has regained its true form and realize the creature was telling them the truth and that hostile Martians are now waiting outside to absorb their bodies and return to Earth as Martian infiltrators.

A ghoul sets up roadside hazards to procure fresh meat.

Retrieved from "https://heykidscomics.fandom.com/wiki/Shock_SuspenStories_Vol_1_10?oldid=109303"
Community content is available under CC-BY-SA unless otherwise noted.