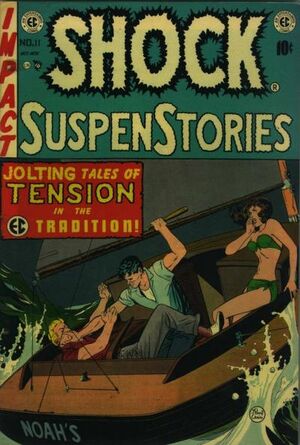 1 of 4
Add photo
A man is so jealous of his wife that he murders a boy from the local orphanage that she has been spending time with in the woods.

A Korean war vet berates his hometown because his black friend who threw himself on a grenade to save his life wasn't good enough to be buried in the town cemetery.

Appearing in "The Space Suitors"Edit

Synopsis for "The Space Suitors"Edit

A woman and her lover plan to murder her husband out in space but he outsmarts them by giving a signal to the rocket to blast off when he shot so that his wife and her lover will suffocate on the barren planetoid.

Appearing in "Three's a Crowd"Edit

Synopsis for "Three's a Crowd"Edit

A jealous husband sends his wife and his best friend to their deaths when their suspicious behavior makes him leap to the conclusion that they are having an affair but they are in reality planning an anniversary surprise.

Retrieved from "https://heykidscomics.fandom.com/wiki/Shock_SuspenStories_Vol_1_11?oldid=109304"
Community content is available under CC-BY-SA unless otherwise noted.