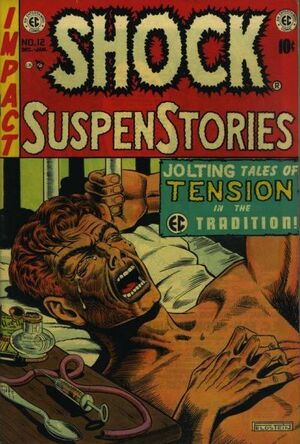 1 of 4
Add photo
An alcoholic ex-reporter tries to get back on his feet after meeting a girl. His old boss says he can have his job back if he brings in a story. He's sitting in a diner when he hears violence occurring in the next room. The diner owner comes out and confesses to murder. The ex-reporter thinks he's found his story and takes down the details. The killer tells him that his wife cheated on him. When he goes in to check the body, the woman begins to come around. The ex-reporter is furious that his story is about to be ruined so he strangles her and then after she is dead he gets a good look at her face and realizes it is the girl he met earlier and fell in love with. He lapses back into alcoholism.

A drug addict murders his father in order to get his fix.

A man's baby is kidnapped and when his wife's mental health grows so bad that he desperately attempts to steal another baby, he is beaten to death by a crowd of onlookers for attempting to kidnap...his own son.

A hotel clerk steals one hundred thousand dollars from a diamond merchant and rents a safe deposit box years in advance under the name 'Brad Gilbert'. After serving ten years for the theft, he meets up with the girl who promised to wait for him because she wants the money. When he goes to open the box, he finds he's drawing a blank on the name he used. They go to a bar and she berates his inability to recall the name. His temper flares and he slashes her face with a steak knife. He heads to the roof as the police close in on him and threatens to jump. The police come closer and he goes over the side, clutching at letters of the sign 'Bar and Grill Beer on Tap' as he plummets. As he lies dying on the pavement, he sees the remaining neon letters spell out 'Brad Gilbert'.

Retrieved from "https://heykidscomics.fandom.com/wiki/Shock_SuspenStories_Vol_1_12?oldid=109305"
Community content is available under CC-BY-SA unless otherwise noted.