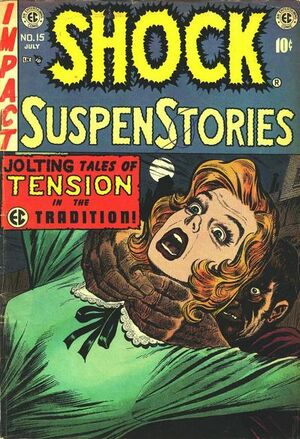 1 of 4
Add photo
A man cannibalizes his new bride in order to survive being stranded at sea.

A mob beats to death a priest when the man refuses to betray the confession of a killer.

Appearing in "For Cryin' Out Loud!"Edit

Synopsis for "For Cryin' Out Loud!"Edit

A man's conscience bothers him so much after he strangles a woman that he has an uncontrollable urge to confess the deed to anyone in earshot.

A detective arrests the man burglar who murdered his wife when she surprised him and, after a brutal beating that hospitalizes him, continues to hound him in the hospital about the death he will receive in the electric chair. The man fixates on his vengeance to such a great deal that the killer flees the hospital and is struck by a subway car. The detective is tortured by the uncertainty of whether the killer burned by the third rail as he should have or if the train struck him first.

Retrieved from "https://heykidscomics.fandom.com/wiki/Shock_SuspenStories_Vol_1_15?oldid=109308"
Community content is available under CC-BY-SA unless otherwise noted.