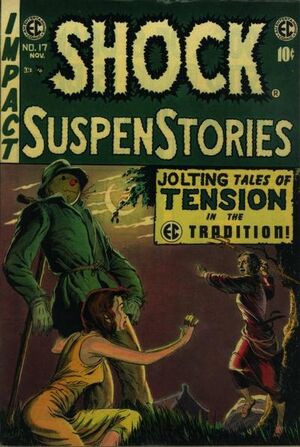 1 of 4
Add photo
A farmer tries to take advantage of a retarded girl he keeps to work on the farm as a servant. She tells him that she's got a boyfriend that she sees in the evening. She goes out into the field to the scarecrow. The farmer gets the idea of disguising himself as the scarecrow so he can get what he wants from the girl. The farmer's wife is awakened by the sound of their love-making and goes out to the field with a pitchfork. When the girl tells the wife about her boyfriend, the wife tries to demonstrate to her that it's only straw by repeatedly stabbing the scarecrow with the pitchfork.

Boris Karloff murders all of his Hollywood contacts after he has been typecast in pictures.

An assassin unknowingly pursues his mark backstage of a theater and kills the man just before the curtain rises.

A diamond thief surgeon cuts open his two goons to smuggle diamonds into the country in their bodies. When he gets a big one worth two hundred fifty thousand he tells the men he will operate on both of them, but place the diamond in only one so that they will not be tempted to disappear. The doctor sends them a note saying he will be delayed because he knows that this will play on their greed and they will turn on each other. They kill each other, but the doctor did not place the stone in either of them but himself.

Retrieved from "https://heykidscomics.fandom.com/wiki/Shock_SuspenStories_Vol_1_17?oldid=109310"
Community content is available under CC-BY-SA unless otherwise noted.