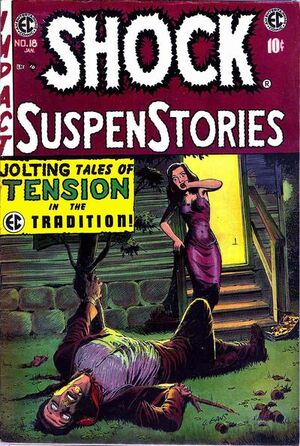 A poor girl knows her father will never be able to afford to buy a Cadillac, so she murders her mother and swears in court that the father did it, so after he is executed he gets his long sought after ride in a Cadillac hearse.

A husband is betrayed by his wife and funeral director when they plot to commit fraud to collect on his life insurance policy for his own murder. They plan to make him appear to be the victim of a mugging and then disappear in South America for a year. When his wife doesn't show with the money, he returns and they have him arrested and he ends up hanging for his own murder.

Appearing in "In the Bag"Edit

Synopsis for "In the Bag"Edit

A cop kills a man with a bowling ball in a bag thinking it's a head.

A man commits murder attempting to acquire enough money to win back his wife's affections. He doesn't know that she and her lover have already made a plot to run him down. When they manage to hit him with the car, they are pleased to find that his wallet is flush with cash.