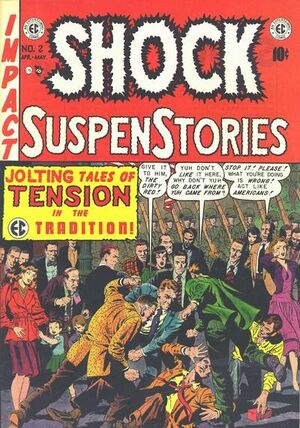 1 of 4
Add photo
A young woman marries an older man for his money and gets tried of caring for him after a heart attack leaves him paralyzed. She comes up with a plot to stock the cellar with canned goods for three weeks and then pretends to be locked inside while her husband starves to death. It works, and she is cleared of suspicion in her husband's death, but the new man she meets manages to lock himself in the cellar without provisions for several days and is reduced to the same condition as her previous husband.

Space explorers land on a planet of intelligent carnivorous plants and fall victim to a demonstration of "She loves me...She loves me not..."

A mob whipped up by anti-communist sentiment beats to death a blind war vet when he doesn't doff his hat to the flag during a parade.

On Halloween night, when a new matron at an orphanage discovers the manager has been stealing the state's allotment for the children and threatens to strangle her to keep her quiet, the children take matters into their own hands and use his hollowed-out head as a pumpkin.

Retrieved from "https://heykidscomics.fandom.com/wiki/Shock_SuspenStories_Vol_1_2?oldid=109295"
Community content is available under CC-BY-SA unless otherwise noted.