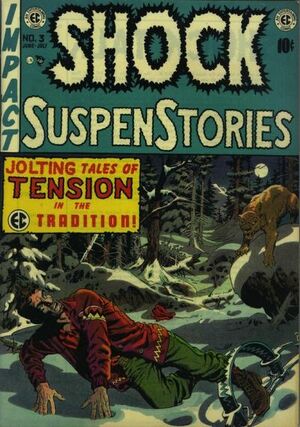 1 of 4
Add photo
A madman holds a dinner party for five people who have done dirt to him in the past and decapitates them.

A bigot sheriff arrests a black man for the death of a white woman based on the testimony of a man who turns out to be the killer. The sheriff executes the suspect in the woods and claims he made a break for it.

Appearing in "The Big Stand-Up!"Edit

Synopsis for "The Big Stand-Up!"Edit

A broadcast technician falls in love with a woman whose transmission he picks up from another planet. She comes to him in a rocketship, but she stands about 200 feet high.

A trapper moves a rival's trap hoping the man will step in it and die so that he can take over his territory. He does step in it, but his desire for revenge is so strong that he chews through his own ankle in order to kill the guilty party before he expires.

Retrieved from "https://heykidscomics.fandom.com/wiki/Shock_SuspenStories_Vol_1_3?oldid=109296"
Community content is available under CC-BY-SA unless otherwise noted.