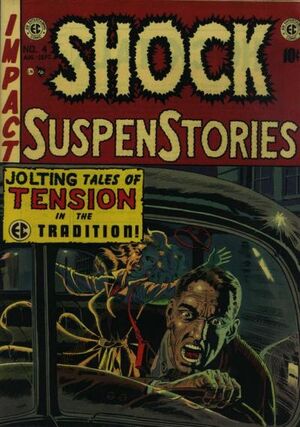 1 of 4
Add photo
When a lumberjack boss blinds a young worker by hitting him in the head with a rock, the other lumberjacks gag him and stuff him in a hollow log for the blind boy to practice chopping through.

A police lieutenant murders his wife and then beats a confession out of an innocent bystander.

In the future marriage licenses must be renewed every three years. A man pays a woman thirty thousand dollars to be his wife for three years, but no sex. She agrees and over time falls in love with him. At the end of the three years she tells him that she'll claim she's expecting a child and the license will automatically renew. He tells her that she could not be expecting a child and reveals he is a robot and that he only wanted a wife during the past three years for crucial business negotiation appearances.

A fight promoter tells the boys he sends into the ring that they've got to have guts. One of the washed-up cases steals a drug from his brother in med school that will make a person look dead so the promoter will be buried alive. When the promoter comes too, however, he has not been buried but he looks down to see that his guts have been removed during an autopsy.

Retrieved from "https://heykidscomics.fandom.com/wiki/Shock_SuspenStories_Vol_1_4?oldid=109297"
Community content is available under CC-BY-SA unless otherwise noted.