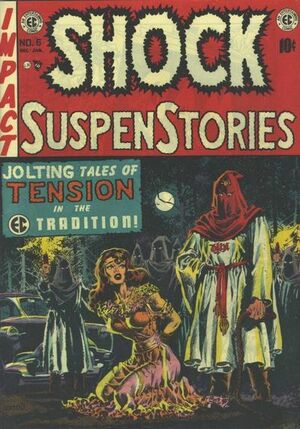 1 of 4
Add photo
A fortune teller predicts to a woman that a man who wants to marry her, but she finds repulsive, is going to inherit twenty-five thousand dollars and die shortly afterward so she marries him. What the fortune teller doesn't tell her is that she wins the twenty-five thousand dollars as a prize, and when she tries to walk out on the slob, he murders her and inherits her money then dies in the electric chair.

A reporter is a witness to the K.K.K. murder a young woman by flogging for consorting with blacks. The Grand Dragon removes his hood to make sure she's dead. The reporter makes a sound and the hooded men catch up with him. They give him a solid beating, but he denies seeing anyone's face because he knows they'll kill him if they suspect. He comes to in what looks like a hospital room. Two men who claim to be F.B.I. and a doctor are present. They ask him why he was beaten by the hooded men. He tells them he can identify their leader. The Grand Dragon steps out from behind a screen and says "That's all I wanted to know." The fake F.B.I. men and the doctor empty their revolvers into the reporter.

Appearing in "Not So Tough!"Edit

Synopsis for "Not So Tough!"Edit

A space commander who is as tough as nails on his crew is reduced to soft putty in the grip of a large gravitational force.

A contemporary retelling of "Hansel and Gretel"

Retrieved from "https://heykidscomics.fandom.com/wiki/Shock_SuspenStories_Vol_1_6?oldid=109299"
Community content is available under CC-BY-SA unless otherwise noted.