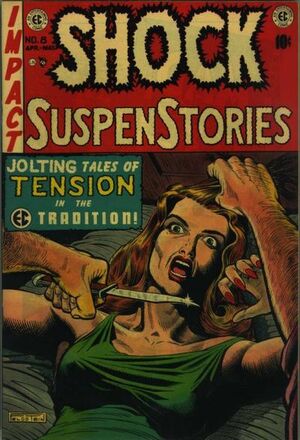 1 of 4
Add photo
A woman plots to give her naturalist husband an overdose of sleeping pills so that she can be with his younger brother. Before he passes, he acquires a large shark and places it in their outdoor pool which the wife regularly swims in.

A man kills a tramp in retribution for when she claims to have been raped by an old man and a mob beats the guy to death.

Appearing in "Seep No More"Edit

Synopsis for "Seep No More"Edit

Every morning, after a man stabs a woman to death and stashes her body in the attic, he sees a huge bloodstain spreading across his ceiling. He tries to cover it up with paint, but every morning it's there. He even puts a bucket on the floor to collect the blood, and it appears half full to him when the suspicious detectives listen to his confession and tell him there is no stain and no blood in the bucket.

Retrieved from "https://heykidscomics.fandom.com/wiki/Shock_SuspenStories_Vol_1_8?oldid=109301"
Community content is available under CC-BY-SA unless otherwise noted.