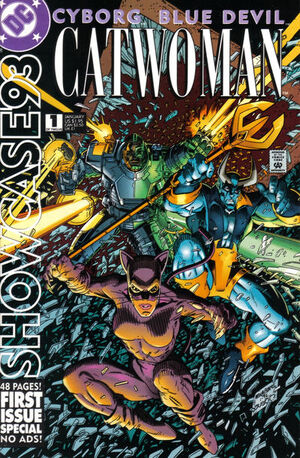 Catwoman attempts to steal an abstract painting for a client, only to find that it is already gone. In the course of investigating who might have taken it she discovers that a new crimelord has moved into her territory. Meanwhile, her room mate Arizona is beaten by a criminal janitor while trying to investigate how one of their cats was poisoned by eating meth.

Appearing in "Speak of the Devil"Edit

Synopsis for "Speak of the Devil"Edit

Technical problems halt production on "Desert Swarm", Dan Cassidy's directorial début. While trying to consult with his special effects man - Morty - in his trailer, Dan is attacked by a humanoid robot and teleported to the planet Maldor.

Appearing in "A Mind is a Terrible Thing...!"Edit

Synopsis for "A Mind is a Terrible Thing...!"Edit

Cyborg leaves S.T.A.R. Labs to have his mind restored by automated systems in his father's house in the Catskill Mountains.

Retrieved from "https://heykidscomics.fandom.com/wiki/Showcase_%2793_Vol_1_1?oldid=1672970"
Community content is available under CC-BY-SA unless otherwise noted.