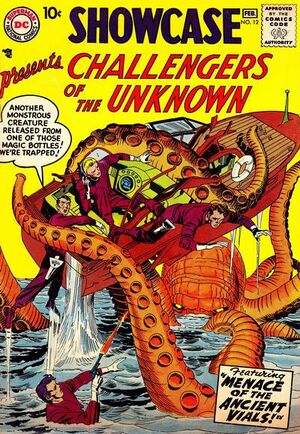 Appearing in "Menace of the Ancient Vials!"Edit

Synopsis for "Menace of the Ancient Vials!"Edit

While chasing the criminal known as Karnak, the Challengers and their prey end up flying into a strong lightning storm, forcing both parties to land. Karnak finds a manor owned by an archeologist who had just discovered the ancient vials of a long dead society, each vial able to unleash a different magical effect. Karnak and his companion steal the vails and use them to battle the Challengers.

The Challengers are able to fight off all the effects of the differn vials, from fighting Karnak as a giant, a giant fire creature, a giant octopus, and an army of Karnak duplicates. Learning that the Karnak duplicates, the Challengers use this fact to find the real Karnak, who tries to use the last vial which turned out to be an antidote to the duplicate vial.

Retrieved from "https://heykidscomics.fandom.com/wiki/Showcase_Vol_1_12?oldid=1457634"
Community content is available under CC-BY-SA unless otherwise noted.