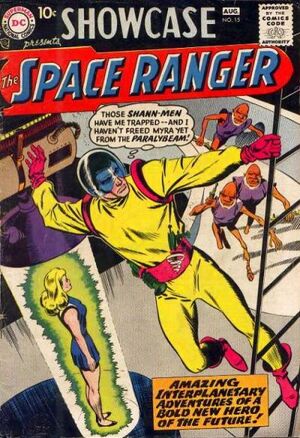 Break out the emergency gear... The Space Ranger has a job to do!

Appearing in "The Great Plutonium Plot"Edit

Synopsis for "The Great Plutonium Plot"Edit

A renegade scientist is stealing all the Plutonium in the galaxy. He hopes to rule the Solar System with his "Teleportator," but needs the radioactive chemical to power it. The Space Ranger follows a few space pirates (via an Audium trail - soundwaves) and is able to locate their hideout. As he and his sidekick, Cryll, rocket towards the thieves main ship, they purposely ram into it, creating a hole in their foe's spacecraft. The pirates are knocked cold, and the Space Ranger takes them to jail.

Appearing in "The Robot Planet"Edit

Synopsis for "The Robot Planet"Edit

Rick Starr finds an odd machine floating in space and takes it aboard his ship to study back at headquarters. Later, he and Cryll recieve a surprise visit from Myra, who tells them that there are odd machines orbiting the sun, pulling the planets, including Earth, out of their orbit. When she sees the machine they were examining, Myra exclaims that it's just like the others. Rick is determined more than ever to examine the machine and get to the bottom of this threat. He finds that the device is made from a metal found on a world in the Sirius system, and he takes off with Myra and Cryll to find out more.

The planet in question is inhabited by a small group called the Shann, fighting against robots controlled by a supercomputer. Myra is taken captive by the robots when they attacked the ship, so Rick recruits the help of the Shann to rescue her and shut the supercomputer down, which will also shut down the robots, as well as the machines threatening the solar system.

Retrieved from "https://heykidscomics.fandom.com/wiki/Showcase_Vol_1_15?oldid=1457637"
Community content is available under CC-BY-SA unless otherwise noted.