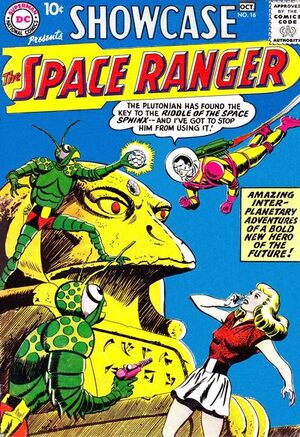 Appearing in "The Secret of the Space Monster"Edit

Synopsis for "The Secret of the Space Monster"Edit

A spaceship pilot reports to President Thaddeus Starr about a space monster sighting while flying near Ganymede, a moon of Jupiter. President Starr's son Rick is skeptical since there has never been a report of any "space monsters" before. He decides to travel to Ganymede as the Space Ranger to check out the bizzare sighting.

En route, he and Cryll view an unusual meteor bombardment heading towards them. Cryll panics, but Rick has a theory and stays on course. The meteors pass right through their ship like a mirage. Rick explains that real meteors wouldn't have made the ionization reactor needle spin like it just was. He believes the meteors and the space monster sighting were man-made illusions to keep people away from Ganymede.

Appearing in "The Riddle of the Lost Race"Edit

Synopsis for "The Riddle of the Lost Race"Edit

At a small dive-bar on Mars, two men talk in hushed tomes about something valuable hidden on Saturn. A mercurian sleeps at a nearby table as one of the men pulls out a map. Suddenly, the Mercurian wakes up and stumbles out the door, secretly snapping a picture of the map as he leaves. When he gets back to his spaceship, Myra calls out to him. The Mercurian is revealed to be none other than Rick Starr, the Space Ranger, in a disguise. He travels back to his asteroid headquarters where Cryll was waiting.

Myra explains to Cryll that a few days earlier she was in the New York Space Museum, studying old vases for an advertising layout, when the criminal plutonian Ragnar-Ell broke in to the manuscript room with his goons and smashed up the place. Myra saw one of them steal an ancient book before they left. That was why Rick had eavesdropped on their conversation in the bar, to find out what Ragnar was up to. Rick, Myra, and Cryll look at the picture he snapped of the map. It appeared to show a trail through the valley of ice, one of the Saturn's most hostile locations.

Ragnar-Ell is already there when the Space Ranger and his two companions land the Solar King on the surface. The plutonian and his henchman are forcing an old man to navigate with the map while they follow. As Rick gets closer, he sees a tribe of angry Saturnian natives charging towards Ragnar-Ell, just as he and his hired thug pull out blaster rays to shoot the natives with. The guns suddenlt melt in their hands when Rick fires his own blast at the muzzles. Ragnar and the henchman run off, thanks to the help of a lightbomb tossed, which emits a blinding light. Rick uses his blackout rod to extinguish the light, but it's too late for them to find out where Ragnar had gone. But the old man who was left behind tells them that he's Evan Blanchard, an archaeologist, and that the criminals were using him to translate an old book that told the location of a valuable jewel. Fortunately, Blanchard had remembered where the jewel was supposedly located. On the planet Venus. The group went back to the Solar King where Myra and Blanchard were dropped off back on Mars so that Rick and Cryll can recover the jewel without worrying about them. Hours later, they make it to a small temple on Venus where the jewel is said to lie at the bottom of a pool of water. Rick gets into a brief struggle with Ragnar, but Ragnar escapes by diving down into the depths. A quick change into his oxygen mask and Rick dives after him. Ragnar reaches the jewel first and flees with it down a side passage, which he then blows up to cause a cave-in securing his escape. Rick has to swim back up and pursue in his ship. Meanwhile back on Mars, Blanchard translates the rest of the script and realizes that the jewel is a key that opens a secret hidden in the Sphinx of Mercury. Myra lets the old man rest while she goes off to Mercury, not wanting to miss the end part of the adventure.

Space Ranger Rick follows wanted criminal Ragnar-Ell to the Sphinx on Mercury, where Ragnar is just about to activate the jewel and, as he claims, achieve mastery over the universe. However, Rick is able to reach him in time to knock him out before the Sphinx can be opened, allowing the Mercurian authorities to arrest him. Under the watchful eye of Archaeologist Blanchard, Rick, Myra and Cryll unlock the sphinx using the jewel. Inside, an ancient machine, that Rick happily hands over to the galactic government.

Retrieved from "https://heykidscomics.fandom.com/wiki/Showcase_Vol_1_16?oldid=1457638"
Community content is available under CC-BY-SA unless otherwise noted.