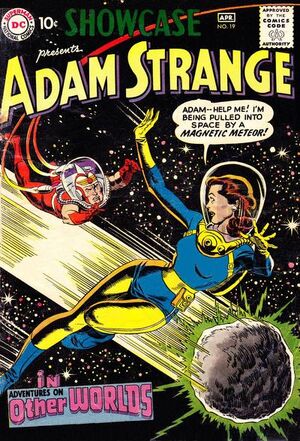 Appearing in "Challenge of the Star-Hunter"Edit

Synopsis for "Challenge of the Star-Hunter"Edit

In Calcutta, India, Adam Strange is in the attendance of a number of explorers whom wish to witness an ancient rope trick. When one of the locals explain that it's a trick, and nobody can disappear at the end of the rope, Adam Strange offers to prove him wrong. He manages to climb up in the air and -- to everyones astonishment -- disappear. However, none witnessing could guess that Adam really intercepted the next Zeta-Beam and is transported to Rann.

Arriving on his adopted world, Adam finds himself greeted by Alanna and a delegation of of people from Rann who inform Adam that a super-being known as Leothric has appeared and demanded to face Rann's chosen champion. The delegation decide to choose Adam Strange as that champion, and Adam accepts.

Confronting Leothric's ship, Adam Strange and Alanna find themselves transported to the planet Ardvak. Leothric explains that he is trapped on his world because the planet's sun is his source of life. He explains that he had built a device to put himself in suspended animation for 100 years, however it malfunctioned and he soon found himself waking up 1 million years later to find that he was the last of his people. Bored, Leothric began a game where he would use his shape changing abilities in a contest against champions of different worlds. At first he was the hunter, but found it too easy to best his opponents, and decided instead to be the hunted, using his shape changing powers to trick his foes. He explains that he will give Adam three chances to capture him with a special ring, or Rann will be destroyed.

Taken to a jungle region, the first attempt to capture Leothric remains, however the choose the wrong animal. Leothric then takes them to the next location, an ocean region, where once again Adam Strange and Alanna fail to choose the right animal. Taken to a desert region, Adam Strange decides that he and Alanna should split up and catch an animal each then decide which one could be Leothric. With two animals captured, Adam tricks Leothric into revealing himself by stating that his tracks give him away. Leothric turns to look, giving himself away and Adam touches the ring to his opponent changing him back into his true form.

Defeated, Leothric releases other champions frozen in suspended animation and they all decide that they should stop Leothric from ever starting his game again. Adam explains that since Leothric cannot leave his planet the best way to do so is by destroying his remote control ship. Sending everyone back home, Adam destroys Leothric's remote ship, and waits for the Zeta-Beam to wear off so that he can return to Earth.

Appearing in "Mystery of the Mental Menace"Edit

Synopsis for "Mystery of the Mental Menace"Edit

Arriving in the African Veldt, Adam Strange prepares to intercept the next Zeta-Beam when he hears the cries of an explorer that is about to be trampled by a herd of elephants. He frees the man and manages to catch the next Zeta-Beam at the last possible instant. Arriving on Rann, he is greeted by Alanna who tells him there is no danger threatening Rann, and so Alanna takes the downtime to show Adam Strange the many places on Rann.

They visit Ranagar City, the Sea of Abyx, and the Battlements of Ys, where Adam Strange is awarded a diamond key. Returning to their boat, Adam accidentally drops the key and when it's diamonds don't scratch the bottom of the boat, Adam's curiosity is piqued. Later in the city of Kallanoor, Adam is awarded with a coffer of gold coins. Later in a royal suite, Adam shows Alanna that the diamond key and the gold coins are fake. Thinking that he is on a false world, Alanna sets his mind at ease with a kiss.

Meanwhile on the planet Ekelon, the energy being known as Zakkad has created a magnetic meteor in order to bring Adam Strange to him, believing Adam to have the true secret of teleportation. Zakkad explains that he used his meteor to replace the gifts Adam was awarded with fakes in order to arouse his suspicion enough to keep him on Rann.

Back on Rann, Adam and Alanna are flying over the red desert of Palamar in a ship when they spot the magnetic meteor. Caught in it's magnetic force the two are pulled out into space, but Adam manages to blast them free. Curious as to where the meteor is going, the two follow it to the planet Ekelon. Landing on the planet, the two soon find Zakkad, who demands that Adam share his secret of teleportation or else he will use the meteor to pull Rann out of it's orbit. Realizing that Zakkad could possibly use the knowledge to rule the universe, Adam tells Alanna to be alert while he distracts Zakkad.

Refusing at first, Zakkad preps the meteor to pull Rann out of it's orbit, however Adam stops him when he has a "change of heart", and as Adam stalls for time, Alanna is able to adjust the controls on the meteors controls while Zakkad is distracted. Before Adam can tell anything, Alanna informs Adam that she just set the controls to pull Ekelon out of it's own orbit. With Zakkad having no way of getting off the planet, the two heroes use their ship to escape. However, when they arrive on Rann the Zeta-Beam wears off and Adam is sent back to Earth.

Retrieved from "https://heykidscomics.fandom.com/wiki/Showcase_Vol_1_19?oldid=1518719"
Community content is available under CC-BY-SA unless otherwise noted.