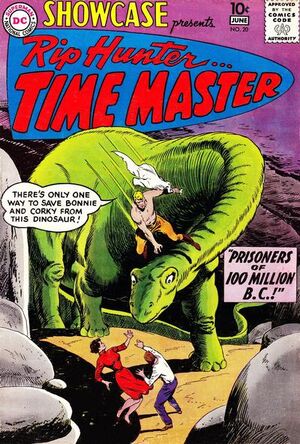 Appearing in "Prisoners of 100 Million BC"Edit

Synopsis for "Prisoners of 100 Million BC"Edit

The Time Masters are a group of time travellers who work out of a hidden lab in the mountains. The group of four contain Jeff Smith, Bonnie Baxter and her young brother Corky, and their leader Rip Hunter.

With a prototype Time Sphere already completed, Rip has just finished working on their second Sphere. In order to test it, Bonnie sets the dial to the early prehistoric era. Corky's disappointed that it's too dangerous for him to go with to see the dinosaurs while Rip and Jeff step into the sphere. Rip pushes a few buttons and the Time Sphere disappears from the room. Just then, two men with guns enter the lab! They had seen the lab on a previous visit, and heard everything that was said through a hidden mic they planted. They told Bonnie to do exactly as they say...

Rip and Jeff appear in the Prehistoric era. They stash the timesphere in a cave and go off to explore. But they don't get far before they are hit by a sudden earthquake, causing them to momentarily lose their footing. Rip and Jeff make a retreat back to the cave, but are stopped when they hear a femal voice cry for help. When Rip and Jeff go to investigate, they find Bonnie and Corky, being held by the gunmen. They used the prototype Time Sphere to get there, and the criminals told Rip that they would all be allowed to leave as soon as they help them gather valuable minerals and gemstones from this era that they can sell back in the present. The group is interrupted by a loud roar, as two dinosaurs roll into the area in battle over territory. Rip and the other Time Masters are seperated from the gunmen as they seek shelter in a shallow fissure. The fight is over quickly, as the surviving dino thunders off.

The group make their way back to the cave where Rip left his Time Sphere, only to find the gunmen waiting for them. They announce they've hidden it somewhere where Rip won't find it, an again tell him to help them find minerals. This time, the ledge the men are standing on cracks and crumbles under their weight, sending them plummeting into a raging river below. Without knowing where the Time Sphere is hidden, Rip and the others are forced to set up camp as they search.

Days pass, and while Rip has fashioned a bow from wood, Bonnie begins to lose faith that they'll ever get to leave. At that moment, a volcano erupts in the distance, and a firey boulder crashes over a patch of trees to reveal the Time Sphere! A river of lava quickly flows through, seperating them from the machine, but Rip grabs his rope and catches it over a tree branch. They swing across and Bonnie and Corky quickly rush into the Sphere. Then, they hear another cry for help. The two criminals survived and were in danger of being bombarded by the lava rocks. Rip won't let anyone die, despite what they've done, so he and Jeff go to help the frightened men, while Bonnie and Corky travel back to the present in the Time Sphere. One of the crooks has a bag full of sparkling gemstones that catches on a branch and tears, slowly spilling it's contents. While the man fumbles to keep his bag from emptying, Rip has to pull him along as they run towards the other, prototype, Sphere. A low rumbling sound and an earthshake alert Rip and Jeff to an incoming stampede of large creatures. They make it to the Time Sphere, but the stampede is gaining on them as well. Rip tells Jeff to grab the oil can from the Sphere's supply kit, while the two criminals tear off pieces of their shirts. With these, Rip fashions some makeshift flaming arrows and fires them with his bow in the path of the oncoming beasts. It works as he hoped, and the beasts are diverted by the flames. Inside the Sphere, Rip pilots the time machine up and into the future.

Back at the lab in the present day, Rip and Jeff tell Bonnie to alert the police about their "companions". They also note that the bag of gemstones the man was carrying is now empty.

Retrieved from "https://heykidscomics.fandom.com/wiki/Showcase_Vol_1_20?oldid=1457646"
Community content is available under CC-BY-SA unless otherwise noted.