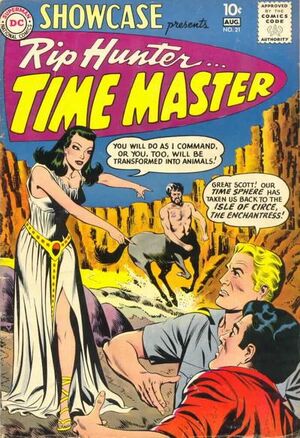 Appearing in "Secret of the Lost Continent"Edit

Synopsis for "Secret of the Lost Continent"Edit

Rip Hunter has an ancient tablet discovered by Alexander the Great. When deciphered, it says it will reveal the location of the lost city of Atlantis, however the bottom line is scratched up and undecipherable. So Rip tells his fellow time masters that they are going on a trip to meet Alexander and ask his help to decipher the missing line.

In 331 B.C, the crew of the Time Sphere find themselves in the middle of Alexander's famous battle with King Darius' army. Rip helps Alexander fight Darius's forces, and in return Alexander allows Rip and his friends to see the tablet. The last line in Alexander's version is indeed untarnished and readable, but it hints of a map that is unfortunately no longer part of the message. Alexander explains that the stone tablet came to him from the island of Aeaea, a name that sounds familiar to Rip. Since the mystery still remains unsolved, Rip and the others hop back in the Sphere, to the time when archaeologists say the tablet was first written, approximately 900 years before Alexander's reign.

The Time Sphere lands, this time in 1200 B.C. Rip and Jeff go out to explore, while Bonnie and Corky circle around high overhead to scout the land. To Rip and Jeff's astonishment, they see a dragon perched on a cliffside watching the sea for trespassers. And then, soon after, a woman appears, followed by men who were part horse, like centaurs! She threatens them to turn back now or be turned into her half-horse servants. Rip realizes that they've arrived on the fabled Isle of Circe, a land said to be cursed, and the woman does indentify herself as the enchantress, herself Circe. Before anther word can be uttered, Bonnie and Corky rush out of the bushes and tear at the centaurs horse-half, revealing the mens bare, human legs underneath a costume of wood and horse-hair. Bonnie says they saw them dressing up in their centaur guises while the Time Sphere was passing overhead. Circe was distressed at first that her ruse failed, but Rip assures her that they mean her no harm. Circe is glad to have found some friends after being forced to live alone for so long. On the waters off the coast, a ship crewed by raiders comes closer. The captain, Xendar, announces that the rumors surrounding the island don't frighten him. Suddenly, the "fake" dragon perched on the cliff flies up and towards the boat, startling the crew! Fires comes out of it's mouth, and Xendar frantically orders a full retreat! Inside the hollowed out dragon, Rip uses the Time Sphere to make the dragon appear like it's flying, while Jeff uses an acetylene torch to make the dragon breath fire. Once the ship has gone out of sight, the "dragon" lands back on the ground. In thanks for protecting her island home, Circe shows them the ancient carvings left on a rock. It turns out to be the writing where the tablet had come from! And next to the writings was a carving of a map that gave the exact location of Atlantis, as well as the year it supposedly disappeared. Circe doesn't want Rip to leave her, but a jealous Bonnie tears Rip away and into the Time Sphere.

14,000 years B.C. is the time they arrive in next, and the city they find themselves hovering over was highly advanced, moreso than anything that could be built with the technology from the current era. The Time Sphere lands in an open area in the city. Just as they all step out, a gang of alien guards comes running towards them, with laser rifles blasting away. One of the beams hits a wall and melts it to rubble and ash. The group try to head back into the Sphere, but find their progress blocked by an invisible force-field. Luckily the laser rays also seem unable to penetrate it, so the Sphere was safe for the moment. An alien appearing out of a doorway calls for them to follow. Down below the city in a secret lab, Rip and theb others thank the being, who calls itself R'Del, of the Jexjeran species. He tells them that the city of Atlantis was originally built as a safe haven for his people, who evacuated their planet Jexjera when it's exploding sun was causing upheavals on the surface. His people broke up into groups to habitat different worlds, until a new planet was found that could hold them all. R'Del tells Rip that a new home had in fact been found, but the city's temporary leader refuses to allow them to leave, unwilling to lose his status as leader. Rip replies that they'd be forced to leave in the long run, because Atlantis would soon be swallowed by the ocean. Alarmed by this news, R'Del double checks his computer for signs of seismic occurence. A large earthquake was due to tear the city apart at any moment! Atlantis' leader, D'Zar, refused to hear the groups findings, thinking their only trying to make him change his mind about leaving. But then the ground begins to shake violently, and the fearful citizens all rush in a panic to their rockets, leaving the city, and Earth, behind. R'Del releases the forcefield around the Time Sphere so Rip and his companions can get away. Flying above, the time masters watch as Atlantis falls and sinks beneath the waves. Corky can hardly believe that they really got to see the lost city of Atlantis and actually help it's people evacuate! Rip comments that this won't be the last great spectacle they witness, thanks to the Time Sphere.

Retrieved from "https://heykidscomics.fandom.com/wiki/Showcase_Vol_1_21?oldid=1457648"
Community content is available under CC-BY-SA unless otherwise noted.