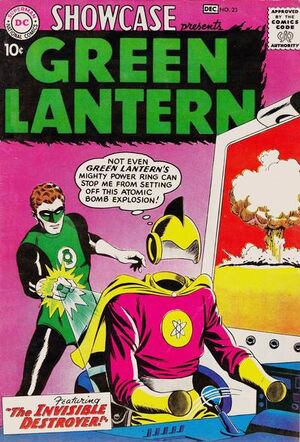 Appearing in "Summons From Space!"Edit

Synopsis for "Summons From Space!"Edit

With Green Lantern making many public appearances with beautiful women, Carol Ferris is jealous that Green Lantern is not spending any time with her. When Hal tries to capitalize on this by asking Carol out on a date, she refuses, citing that employees shouldn't date.

Later, Hal is contacted by the Guardians via his power ring who tell him of a danger that needs to be stopped on the planet Venus. Changing into Green Lantern, Hal travels to Venus to find a primitive tribe of humanoids who are being terrorized by dinosaurs. Using his powers, Green Lantern defeats the Pterodactyls that are terrorizing this tribe and returns to Earth where he manages to get a date with Carol as Green Lantern whereas he failed to do so as Hal Jordan.

Appearing in "The Invisible Destroyer!"Edit

Synopsis for "The Invisible Destroyer!"Edit

Visiting Carol's office, Hal is shown an ad in the newspaper asking for Green Lantern's help. Leaving and changing into the Green Lantern, Hal races off to see what the problem is and is attacked by a costumed being known as the Invisible Destroyer. When his power ring doesn't work, Green Lantern tries to attack him hand-to-hand, but the Destroyer only disappears.

When G.L. arrives at the location in the newspaper classified, he learns that it's the home of Doctor Philips. Philips warns Green Lantern (albeit too late) of the Invisible Destroyer, but adds that he believes he created the villain by mind-over-matter. Probing Philips mind, he finds that the Invisible Destroyer manifests from Philips' own subconscious.

Retrieved from "https://heykidscomics.fandom.com/wiki/Showcase_Vol_1_23?oldid=1457652"
Community content is available under CC-BY-SA unless otherwise noted.