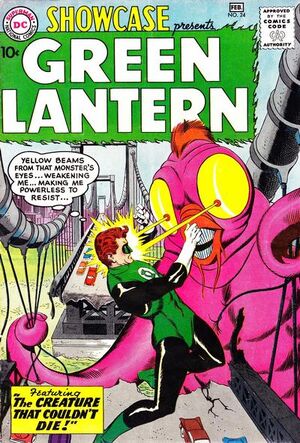 Appearing in "The Secret of the Black Museum!"Edit

Synopsis for "The Secret of the Black Museum!"Edit

When Hal Jordan is trusted to deliver secret missile plans to the military, he realizes that they are now missing. Probing his mind with his power ring, he learns that they were stolen from a pick-pocket at the amusement park. Going there as Green Lantern, Hal is briefly distracted when he has to save some park patrons who are on an out of control roller coaster.

Tracking the thief to the amusement park's Black Museum, he finds that there are a group of crooks who plan to utilize the plans to build a rocket of their own. Getting the drop on Green Lantern, the crooks who stole the plans knocks GL out. To get rid of him, they shackle the hero under their rocket and set it to launch.

However, Hal is able to protect himself from the rocket blast by making a shield with his power ring. He then uses his ring to free himself and then imprison the crooks before flying after the rocket and stopping it from being detonated. Afterward, he returns the plans and is made a hero.

Appearing in "The Creature That Couldn't Die!"Edit

Synopsis for "The Creature That Couldn't Die!"Edit

Invited to drive Carol out to Pine City, where she will meet with the managers of another aircraft plant to discuss a company merger, Carol tells Hal of a dream she had where the two of them were married and she learned that he was really the Green Lantern. When Carol asks him if he really is the emerald crusader, Hal laughs it off, telling her it was just a dream. However, the road suddenly ends and they end up driving off the side of the mountain. Carol faints and Hal uses his power ring to save them.

Changing into Green Lantern, Hal notices a trail of giant foot prints. Following them, he finds a group of scientists who are also tracking the footprints. They tell G.L. that they were searching for their creation, a creature they created in their lab using cosmic rays that grew to a gigantic size since it was born.

Finding the monster rampaging through the city, Hal tries to use his power ring, but it does not work because of the yellow energy that is inside the creature (and powers its eye beams). Even the military's weapons have no effect on the monster. Hal then comes up with the idea of creating a giant test-tube that blocks cosmic rays to put around the monster. It instantly weakens the creature who cannot even use its eyebeams, and it eventually shrinks to nothingness. Hal then changes back to his civilian guise and finds a doctor to bring to Carol who is just now regaining consciousness. The next day when they get the newspaper, Carol reads the story about Green Lantern fighting the monster and is convinced that Hal is not the Green Lantern.

Retrieved from "https://heykidscomics.fandom.com/wiki/Showcase_Vol_1_24?oldid=1457654"
Community content is available under CC-BY-SA unless otherwise noted.