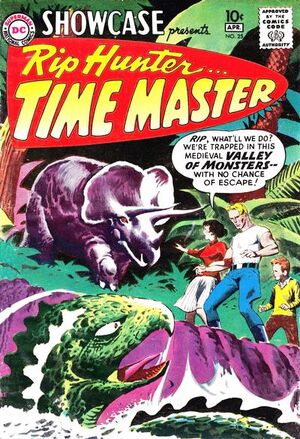 Appearing in "Captives of the Medieval Sorcerer"Edit

Synopsis for "Captives of the Medieval Sorcerer"Edit

A call from Rip's friend, Blakeslee, send him on a mission to help Doctor Senn travel to the past. With Bonnie and Corky tagging along, the Time Sphere is taken into the country of Ritannia of the year 960 A.D. Doctor Senn soon goes missing, and the ruler of the land, King Gamina, has Rip, Bonnie, and Corky thrown in the dungeon. Though they manage to escape their cell, the sorceror Cholorus catches them and orders they be sent to the valley of monsters!

Though they encounter many frightening creatures, including a sea serpent, a rhino-like beast, and a large bipedal being covered in quills, Rip and his companions survive the valley and make it to the other side. When they return to the Time Sphere, they find the king bound and gagged inside. He tells them that he was struck from behind and thrown inside. He's never seen Rip or the others before, meaning that the king who threw them in the dungeon was an imposter. Heading back to the castle, they find the false king in talks with Cholorus about giving up the secret of his powers in exchange for the crown. Rip realizes that the false king is actually Doctor Senn in disguise. He forced Blakeslee to make that call to Rip so he could go back in time and steal the sorceror's powers. Cholorus is naturally enraged by the ruse and, thinking the real King Gamina was part of the plot, declares war on the kingdom! With his spells, he is able to deflect any arrows and spears thrown at him, but Rip has an idea and ducks into the Time Sphere. Flying over the sorceror's head, Rip lassoes Cholorus with his rope and lifts him into the air. The guards apprehend the startled wizard as Rip removes something from his finger. A ring containing a magic stone, that Chorolus couldn't use with his hands bound to his sides. To Doctor Senn's dismay, the stone is smashed on the ground, Rip believing it's too powerful for any one man to wield. With King Gamina reclaiming his throne, Rip takes Bonnie and Corky, and a tied up Senn, back into the present where "the good doctor" can face criminal charges.

Retrieved from "https://heykidscomics.fandom.com/wiki/Showcase_Vol_1_25?oldid=1457656"
Community content is available under CC-BY-SA unless otherwise noted.